I have re-posted this post I did in 2009 as it was the very first time that David Nightengale was mentioned on this blog.

David was one of the very few people who were lucky enough to own the elusive and wonderful Century 21 Submarine Aircaft Carrier toy. This article considers whom the box artists might have been, along with some other box art.

Enjoy and let me know your thoughts as these box artists remain unknown to this day.

Continuing my look at JR21 / Century 21 toy box art I must admit I have been fascinated by the imagery on the JR21 Submarine Aircraft Carrier (pictured above) ever since I saw it for the first time when David Nightengale auctioned one on Ebay earlier this year.
With its SWORD- like yellow side-bar and list of features, the illustration is beautifully composed. So who might the box artist be? The original comic strip was drawn by the late great Ron Embleton. I've posted three of these below, with pemission, as they appeared reprinted in the 1980's fanzine Action 21  by David Nightengale's Engale Marketing, where back issues are still available! 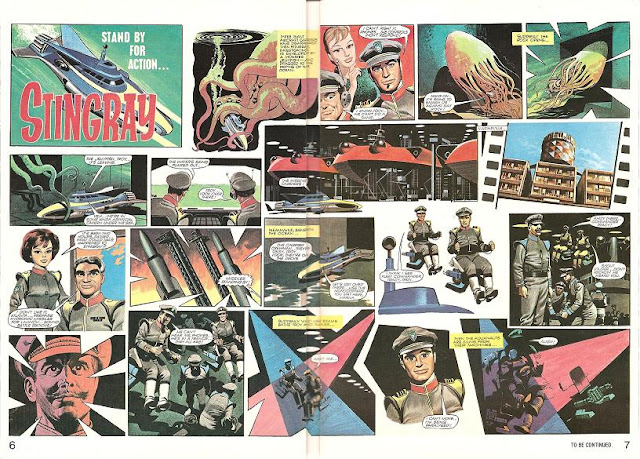 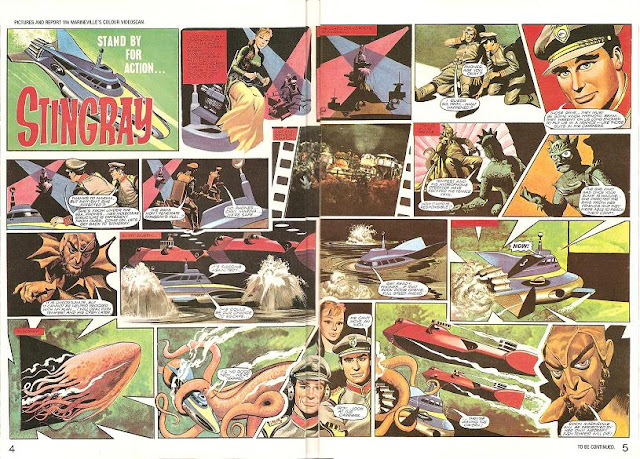 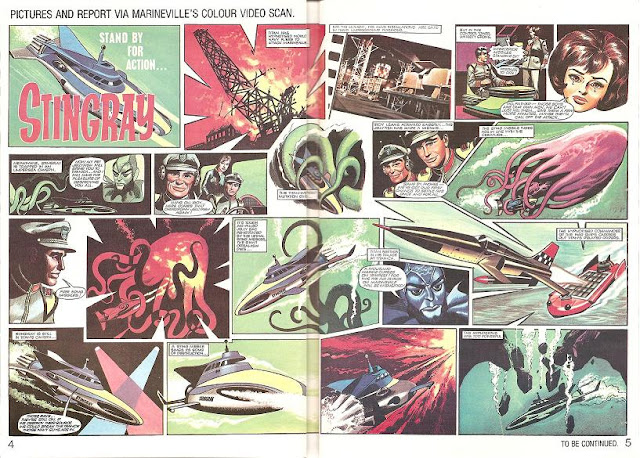 I contacted Ron's brother Gerry to see who he thought the box artist might be:
"I was never terribly involved with Anderson products, it was Ron's thing. The box artwork is certainly his. I did some annual work, some fill- in strips at holiday time and some colouring etc. all a long time ago. Gerry Embleton."
The last person to paint an official version of the Submarine Aircraft Carrier, in the 1993 Stingray comic (Issue 12), is renowned illustrator Graham Bleathman. I asked Graham for his ideas on the  JR21 box artist:
"This and other Project SWORD box art paintings were probably done either 'in house' either in Hong Kong or the UK, or by someone at an art agency given the task of packaging the Sword range for the manufacturers.
They could have been done by a freelance artist operating alone (the equivalent of someone like me, for instance) of course... I remember doing quite a bit of Anderson-related packaging illustrations for various companies as a freelancer in the 90s! Looking at the Submarine Aircraft Carrier box art, I personally would not have said it was by Ron Embleton...its too sketchy to my mind, while Embleton's art is more controlled and precise!..
...There isn't much I can say about the Submarine Aircraft Carrier illustration that I did for the Stingray comic in 1992 or 3. With Alan Fennell's approval, I suggested doing the cutaway of the craft because the Ron Embleton Stingray strip was being reprinted from TV21 in the comic at that time.
All of the interior was, as far as I can remember, made up, simply based on research into submarines and aircraft carriers, with a nod to any interiors that Embleton created. The toy predated the original strip, I would think, and I wouldn't be surprised to discover that Embleton was asked to include it perhaps as marketing gimmick that was - in hindsight - never followed through; after all there were no adverts in TV21 for the toy as far as I can remember!
I first came across the toy itself at Dave Nightingale's house around 20 years ago prior to doing the illustration in the Stingray comic, although I have no recollection that there were pieces missing from it (the two Conning Towers)."
*

"Paul, I think I have pinpointed at least one of the artists CENTURY 21/ JR21 toys used for the box art. A guy called Peter Archer was used for most of the cover art in the Thunderbirds paperbacks (2 1960's examples below. Ed) and his interpretation of the vehicles is very similar to that which is seen on the boxes of the (two versions of the )Thunderbird 1 toys (pictured below). Just something about the brush strokes and the use of colour that is very similar. I think he was only responsible for certain artwork too and not all of it - mostly Thunderbirds including the inner plinth for the Dinky Thunderbird 2 too (pictured below)"

I asked Graham Bleathman to take a look as well:

"Paul, I've never heard of Peter Archer, but the art styles are similar comparing the paperbacks and JR21 toys! I'd say there is a good chance that the artist is the same". 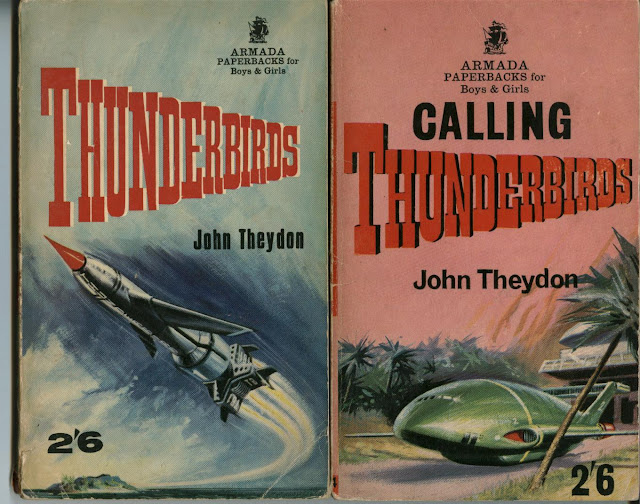 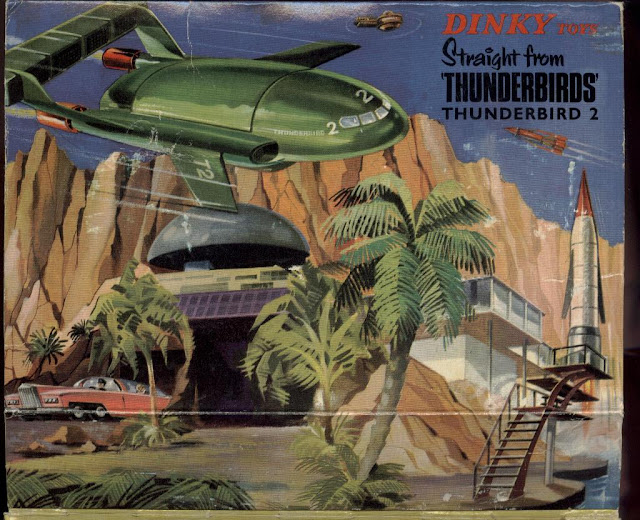 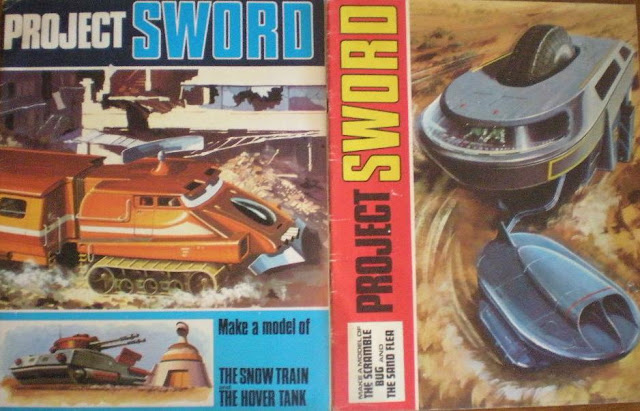 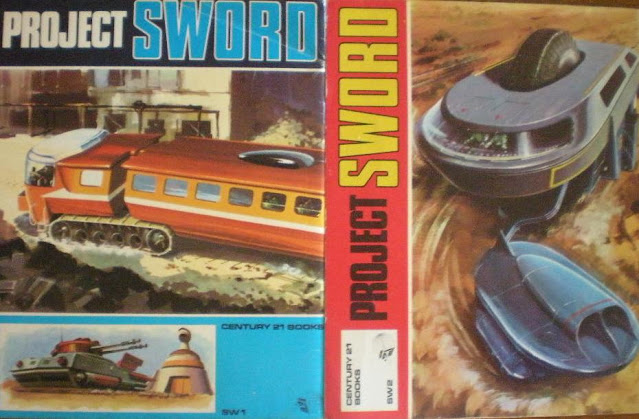 The two Project SWORD "cut out and make a model" books by Century 21 (pictured above) are less well-known than the toys, but equally popular with collectors wanting the whole range.
Being able to 'make' models from these books makes them a combination of the comic strips, annual and toys and as such may have had artists other than those drawing the strips.
As is stands, the number one online Gerry Anderson comics resource, The Gerry Anderson Complete Comics History (GACCH), classifies the Make a Model books' cover artists as unknown.

Illustrator Graham Bleathman contacted me regarding the Hover Tank and one possible artist:

"Paul, I'm not convinced that the hover tank illustrations in the SWORD press-out book and Annual (both pictured above) is by Eric Eden. I'm not certain about this, but I think they may have been painted by someone called Chris Harrison.
Its the same person who did some of the covers for the very early Joe 90 comics, and also some of the Saturn Probe illustrations in TV21. Eric Eden tended to use an airbrush in his Dan Dare/Century 21 work; these pictures are far more 'painterly', for want of a better expression.
I can't remember whether the Hover Tank appeared in TV21 or not...if it did, it would have been as a single b/w illustration for a text story by either Ron Embleton, Don Lawrence or Malcolm Stokes (or D. M. Stokes, as he signed his name in the Thunderbirds comic, the 'D' being Derek, I believe).
Not sure that Chris Harrison did any Sword illustrations for TV21 as such, as he was by then doing Saturn Probe pictures and those early Joe 90 covers. On the GACCH website feature about the TV21 coderoom, the 'Ivan Quant' picture that is featured there from TV21, I was led to believe, is Chris Harrison."
(pictured below with permission from GACCH) 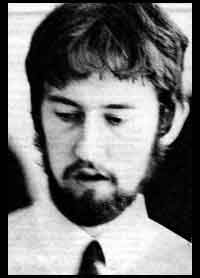 I would like to thank Graham Bleathman, Jim Lewis, David Nightengale (Engale Marketing) and GACCH for their contributions to this article and permission to use certain images. All other images from the Woodsy collection.
2009.
Posted by WOODSY at 18:00