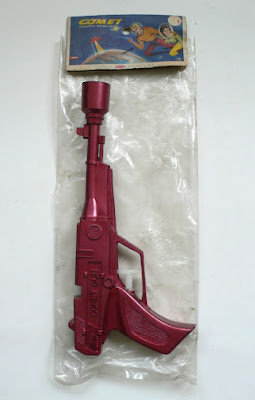 This bagged COMET toy ray gun I saw online has had a long tradition as a design.

One of the first vintage toys I ever bought as a collector was a version of it at the Normanton evening toy fair in the ear;y 1990's. It was a Monkey Division toy gun.= like this one I saw online. 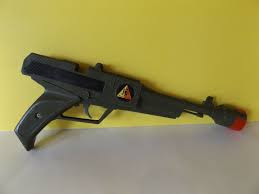 It came in a closed box I think, The word Okinawa rings a bell but that maybe because Remco issued the name under the Monkey Division brand, which I might have wanted rather than what I got. Wishful thinking.

Remco were good at recycling. The same design ray gun popped up in the Hamilton Invaders  .....

and their Star Trek line, along with other recyclers like the 'cricket' style Jeep vehicle.