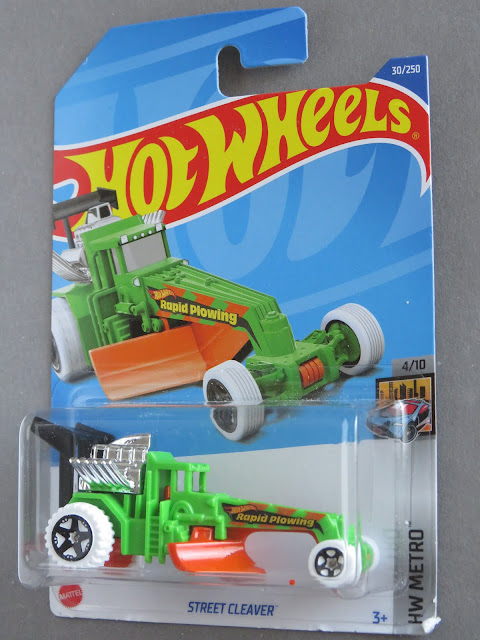 Right from the start, in 1968, Hot Wheels were known for their Hot Rods and way-out custom cars. This one will certainly tear up the road - literally. It is a Hot Rod version of a road grader called Street Cleaver. The original version, with six wheels, appeared in 1995. It was superseded by a four-wheel version in 2015. This green and orange variant being part of the 2022 range.
Rather than the usual dinky little V-8, this monster is powered by a chromed 10-cylinder engine. Only the orange lower body, including the plow and cab interior, is metal. The green upper body is plastic, as is the black rear wing. There are no clear windows. White wheels, with black hub detail. Markings are for Hot Wheels Rapid Plowing.
Due to a lack of space, there is less information than usual on the base. Just the Hot Wheels and Mattel names, Made in Malaysia, and a few numbers. Copyright date on the back of the card is 2021.
The card has also been changed again. Instead of the blue background colour fading out as it nears the bottom of the card, there is now a sharp division between the blue upper card, and the white lower section, making the model stand out better against the plain background.
Here is the Hot Wheels Wiki page for Street Cleaver, which covers both four and six wheel versions.
Street Cleaver | Hot Wheels Wiki | Fandom
Paul Adams
New Zealand
Posted by WOODSY at 23:39