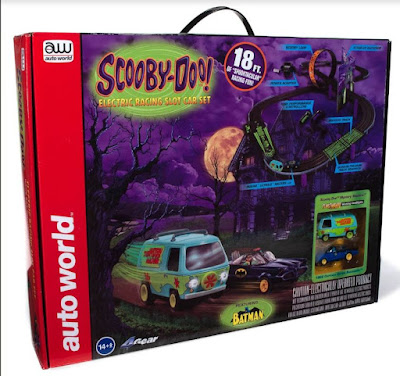 I get emails from AutoWorld covering kits, die-casts, and slot-cars. The latter do not usually interest me, but this set looks like fun. Scooby-Doo Meets Batman Electric Racing Slot Car Set, in HO scale.

There is 18 feet of two-lane slot car track - 18 ft of Spooktacular Racing Fun. There is a cardboard stand-up backdrop, a Scooby loop, two squeeze tracks, and glow in the dark track graphics.

Two vehicles are included. The Scooby Doo Mystery Machine van, which does not include any figures; and a 1966 Cartoon Series Batmobile, in dark blue, with figures of Batman and Robin. This is a cartoon version of the 1966 live-action Batmobile, which did actually appear in a couple of 1970s episodes of Scooby Doo. Both vehicles are available separately, and not just in this set.

The US retail price is listed as $189.99, so it is an expensive set, but there is plenty in the box. This site shows the contents of the box in detail.

This 'spooky' set has been released in time for Halloween.

It seems there have been a number of both Batman and Scooby Doo slot car sets, in various scales, by different companies over the years.

Email ThisBlogThis!Share to TwitterShare to FacebookShare to Pinterest
Labels: Batman, Scalextric, scooby do