As a youngster I always felt a connection between 2001 and Century 21.  I could hardly be aware at the time that director Stanley Kubrick, having apparently seen some of Gerry’s shows had called the Century 21 studios with the intension of hiring and using the unique skills of the special effects team on 2001.  Century 21 were obviously reluctant to lose their people, although special effects assistant, Brian Johnson felt it was an offer he just couldn’t refuse, and left the studio towards the end of the filming of Thunderbirds, much to the annoyance of Gerry, who told him, ‘he’d never work in the film industry again!’

Brian, of course would return to work with Gerry again, first providing practical effects on the 1972 series The Protectors and then moving on to Space: 1999, which as we know drew a great deal of visual inspiration from 2001: A Space Odyssey, even the title is similar, which MGM considered suing over. 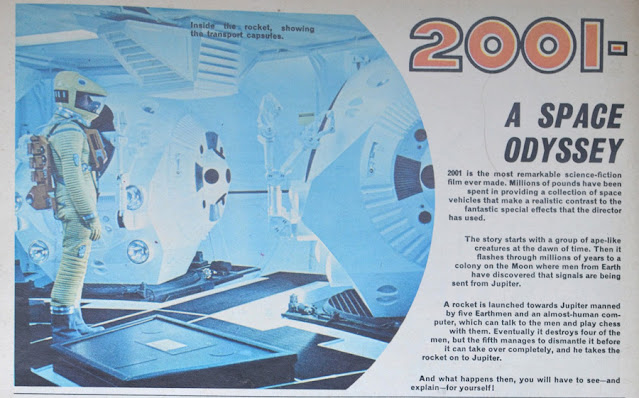 Stills from 2001: A Space Odyssey did appear a few times in TV21, which used quite a few publicity shots from the film starting with a short half page article in issue 178, dated June 15, 2068. It briefly describes the story up to the point when astronaut, David Bowman enters the star gate. An accompanying publicity photo shows fellow astronaut Frank Poole in the Pod Bay.

TV21’s occasional Saturn Probe feature also used photos from the film, although they are used to illustrate the article’s descriptions of the exploration of Saturn. (ironically, the originally screenplay had the planet Saturn as the destination for the ‘Discovery’, rather than Jupiter, however the special effects team had doubts about creating a convincing look for Saturn’s rings) 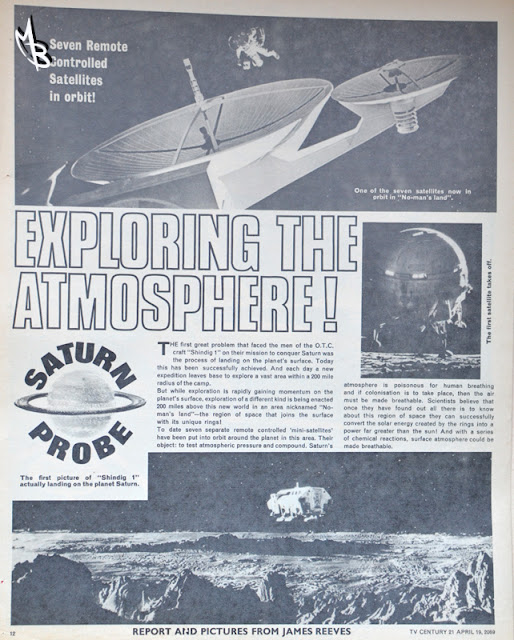 In issue no. 222 (dated April 19, 2069), a piece titled, ‘Exploring the Atmosphere’, used three photos. One is of astronaut Dave Bowman floating next to the ‘Discovery’s AE35 unit’s antenna’, another shows the Aries 1B lunar shuttle, and finally a photo of the rocket moon bus travelling above the Moon’s surface.

Issue no. 224 (dated May 3, 2069) has a half page colour spread apparently showing the crew of the orbiting Saturn space probe, ‘Shindig 1’. The photos actually showed stewardesses aboard the Aries 1B lunar shuttle and one the ‘Discovery’ astronauts. 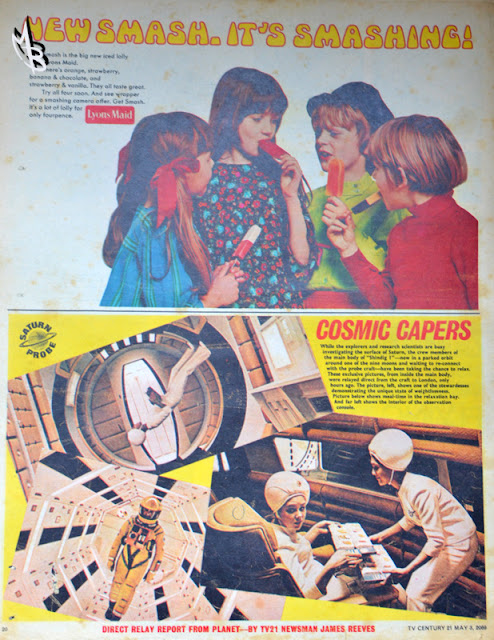 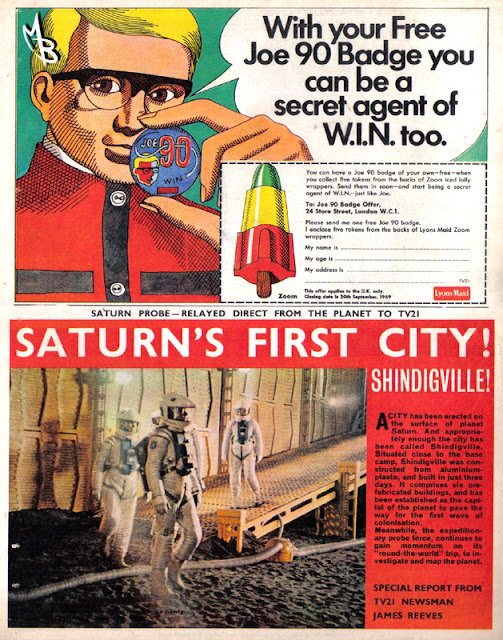 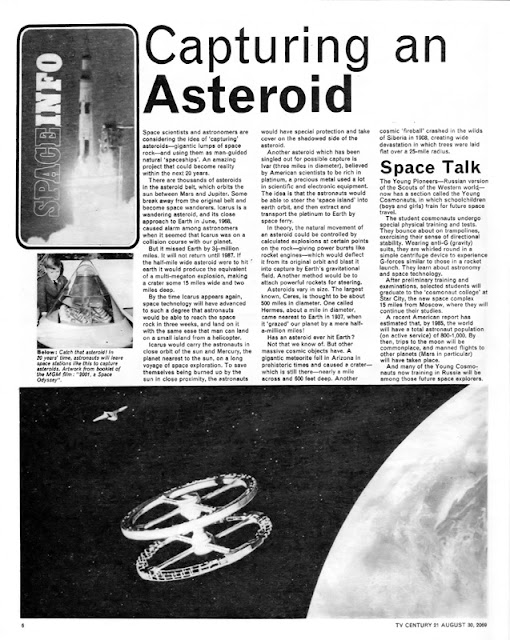 The Century 21 toy line Project SWORD also rode on the coat tails of 2001, as we’ve talked about many times previously on the blog. 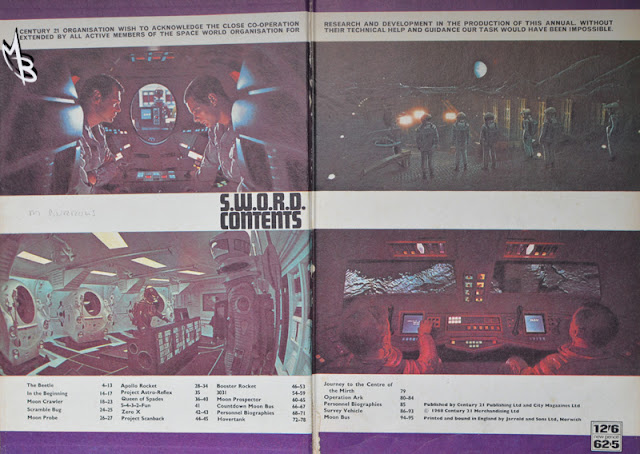 Marketing events were conceived to publicise the Project Sword range of toys to coincide with cinema showings of 2001, including a display at Hatchett’s Playground Club in Piccadilly, London, as well as displays in cinemas. (Project Space was one of several proposed titles for the film 2001, so I wonder if that actually inspired the name Project Sword.). 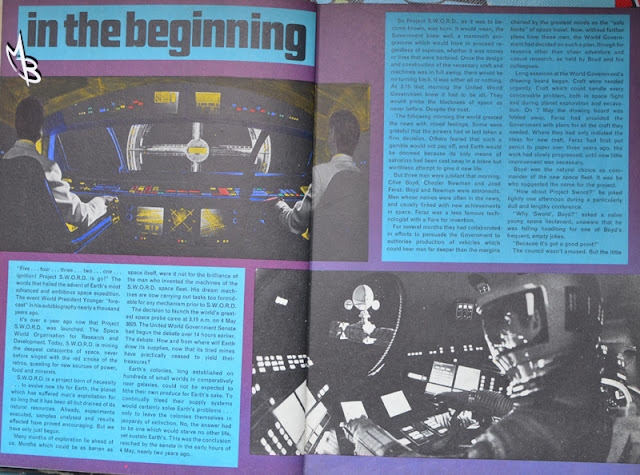 When I went to see the film during its first release I can’t honestly recall seeing any displays in the foyer of my local cinema, but I do remember recognising scenes from the film in my Project Sword annual which is littered with publicity stills. 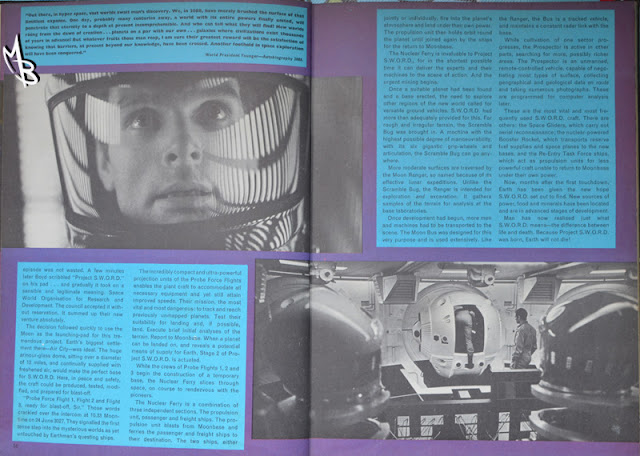 I still think it’s odd that TV21 didn’t capitalise on their advertising connection with the film and their range of toys. A photo spread in the comic would have gone down well with SWORD fans. Maybe it was a licensing thing, or possibly something that Director Stanley Kubrick wasn’t happy with?

THE SEVENTIES AND BEYOND:

By 1970 Century 21 Publishing had gone, but a new comic edited by former TV21 art editor, Dennis Hooper called Countdown, and published by Polystyle would continue to feature Gerry Anderson’s TV series, including the live action, UFO, which ironically did feature a surviving prop from 2001. A back pack originally worn by an astronaut in the Tycho Excavation scene is re-used by SHADO astronauts during a space- walk in the episode, Close up. 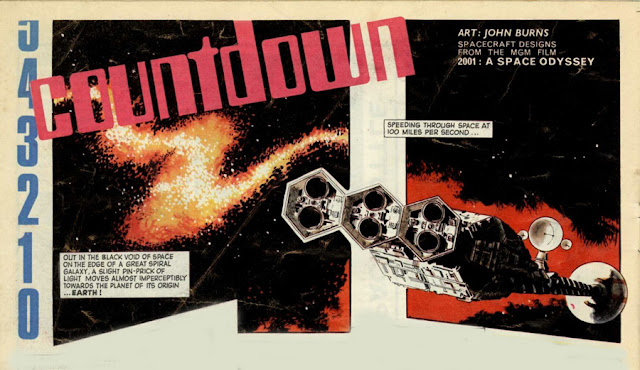 It also contained the eponymously titled Countdown, an original science fiction strip drawn by John M Burns, and not based on a TV series. The premise dealt with the return to Earth for the spaceship Countdown, (The design based on the 2001 Discovery) and finding a totalitarian government running things. The unique point about the strip is it used space ship and suit designs from 2001: A Space Odyssey. 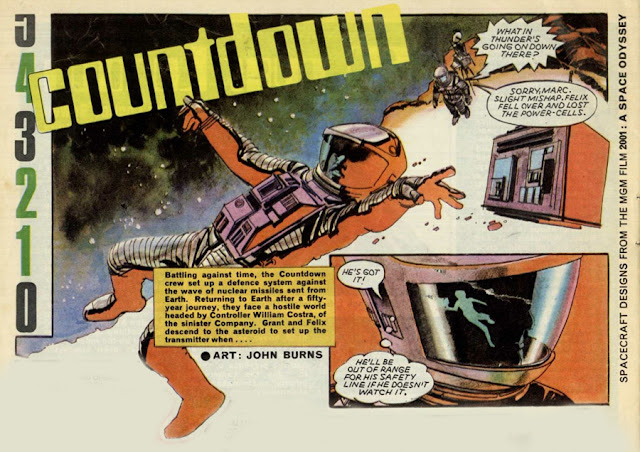 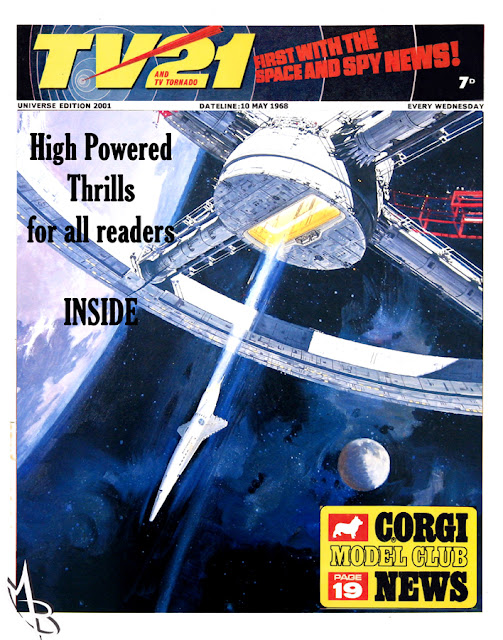