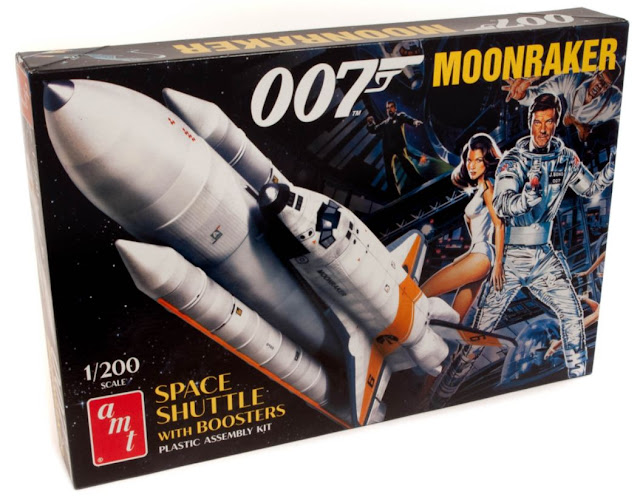 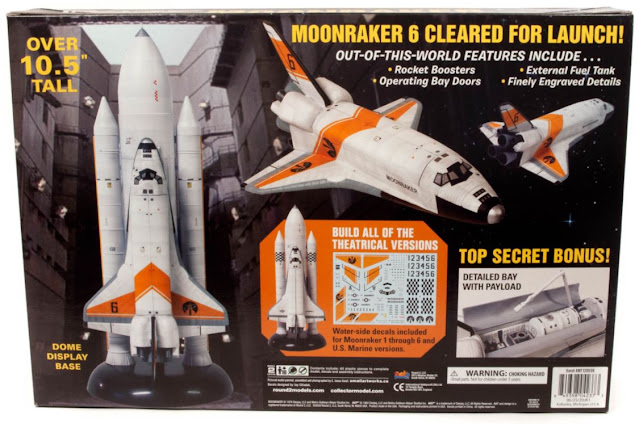 I spotted some new 007 kits from AMT. Rather expensive, but very nice looking.

First up, a 007 Moonraker Space Shuttle in 1/200th scale. This is a simple kit, and depicts the Shuttle in Full Stack form. There are alternative markings for Moonrakers 1 to 6, and also a US Marines version, which I do not think I have seen before.

This video from You Tube shows the parts, and a quick build. The External Tank and Solid Rocket Boosters are moulded already joined together, in two halves. The Cargo Bay is a single piece, with a separate Robotic Arm, and the bay doors open.

There does not look to be an undercarriage, and no clear parts. It is a very simple kit, so there should be no problems during assembly. Moulded in white plastic, with a display stand.

The other two models are car kits, in 1/25th scale, from Diamonds Are Forever. The 1971 Ford Mustang Mach 1 driven by Bond, and a 1970 Ford Galaxie Police Car. Buy both kits, and you can recreate the movie car chase.

Odd point, all the boxes say 007, but do not mention James Bond himself.

AMT is now owned by Round 2, and the photos are from the Round 2 site.