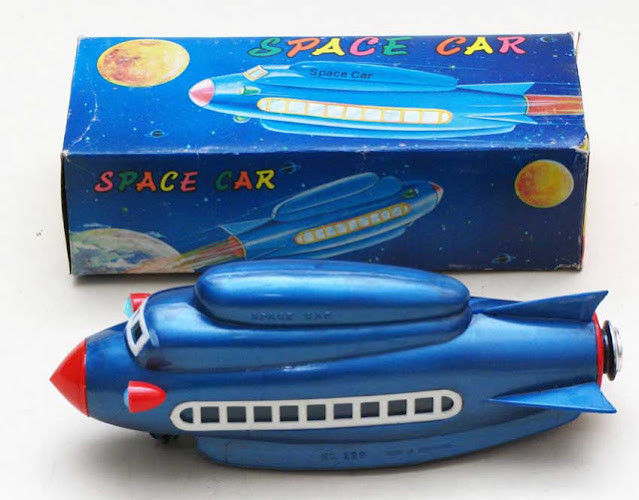 We know the model number is 226 and it was made in Hong Kong. Its also friction drive.
Could it be one of the X-series of toys we've covered before on MC?
Way back in 2009 collector Ferryman brought the little known JR21 series to our attention for the first time [click here to see the series] and adding a couple of new X discoveries from over the years now gives us the following list of model numbers for the X-series, made by Ming Tat of Hong Kong, beginning with the X-30.
X-30 Space Explorer No. 303
X-40 Space Rocket: No. 232
X-50 Space Racer: No. 233
X-60 Space Rocket on Launching Truck: No. 234
X-70 Astronaut: No. 235
X-80 Space Capsule No. 240
X-90 Space Car No. 241
I am now wondering if it is possible that the X-20 belongs on this list?
Certainly the number X-20 fits and also the model number 226, which would both be at the start of the series.
Its an attractive thought.
There are shortcomings to this theory. The Space Car box does not appear to have X-20 on it, which is unlike the rest of the true X-series, which all have their X numbers quite visible on the box front. Also the Space Car's overall look is quite different to the rest of the series. It has a more atomic age feel to it rather than the space race looks of the other vehicles.
So, what do you think readers? To be or not to be in the X-series?
Posted by WOODSY at 09:07