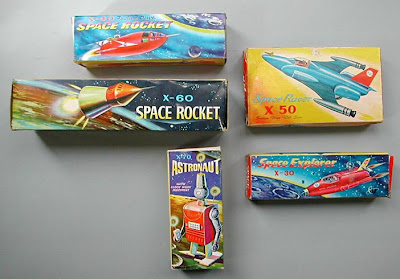 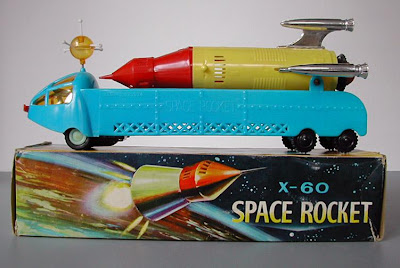 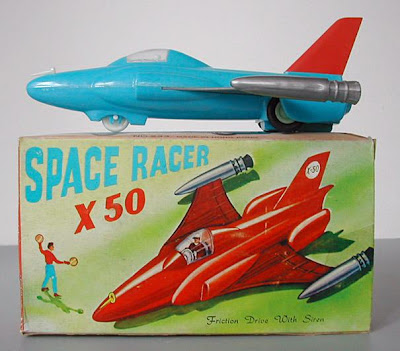 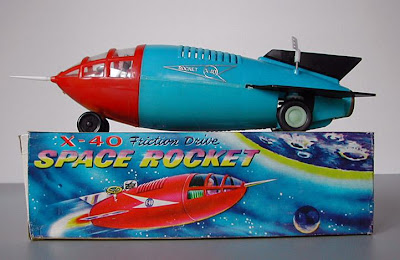 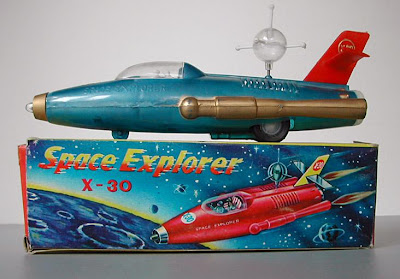 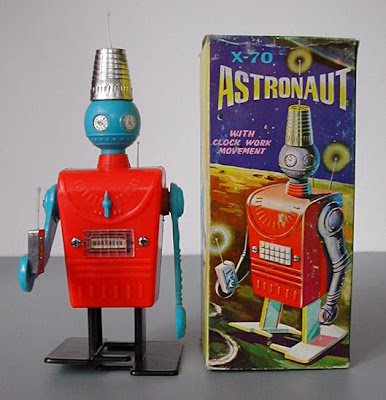 I first came across the X-40 Space Rocket toy back in the early 90's. It caught my eye because it bared a passing resemblance to a stretched Fireball Junior and it also featured markings that bore more than a passing resemblance to the Project Sword arrow symbol. My X-40 sat on its lonesome on my shelf for many years until in 2001 when I happened upon an X-30 Space Explorer at a collector's fair. The X-30 caught my eye because box and toy are very similar to the X-40.
The two toys sat happily together on my shelf for a few more years until a toy dealer told me they were an unbranded part of the S.W.O.R.D. range of toys. He presented the JR21 X-60 Space Rocket Truck to me as proof of the link between these toys and S.W.O.R.D. toys. I was convinced there was a link between the 'X' toys and JR21 but not that they were S.W.O.R.D. related as the designs were a lot more retro and naive. The next couple of years proved fruitful in expanding my small collection which now includes the X-50 Space Racer (obviously based on the Spirit of America record car), and the X-70 Astronaut. The X-70 is the most bizarre and unlikely member of the team but it has the right DNA – similar box art and plastic construction.
The proof for me that the 'X' toys form part of a range can be found in the product numbering on the boxes. The models' (pictured above) numbers are sequential as follows:
X-40 Space Rocket: No. 232
X-50 Space Racer: No. 233
X-60 Space Rocket on Launching Truck: No. 234
X-70 Astronaut: No. 235
The X-30 Space Explorer bucks this trend because it is marked No. 303
Maybe the factory that manufactured the 'X' toys was acquired by JR21 and the toys were so branded after that point. Or perhaps JR21 simply commissioned an exclusive run from the manufacturer of the X-60 truck in a JR21 branded box. One thing that is for sure is that adding the JR21 endorsement would have increased sales.
Whether these so called 'X' toys are actually JR21 still remains a mystery but truth is out there somewhere.
Ferryman
All pictures courtesy of Ferryman. Article specially written for the First Bloggiversary by Ferryman.