Hi Woodsy
Here is another short piece on one of the Corgi toys you had. Again, this was not a model I ever had. That means all my comments are based on photos, not an examination of the model itself, so treat my comments with caution.
The Astro 1 has featured before on Moonbase Central, which I did not realise until just before sending this in.

The Chevrolet Astro 1 from 1967 was the first of three concept cars to carry the Astro name, designed to show what the cars of the future might look like. The Astro 1 had a rear-mounted, 6-cylinder engine, concealed headlights, and was under three feet high.
There were no doors, the entire rear body section lifted up to allow access. Because getting in and out might be difficult in such a low vehicle, the seats were raised as the rear body lifted. The car was red, with a black triangle on the nose, and a black interior.
It was to prove a popular car with model companies, both die-cast and plastic kit versions appearing in various scales. The Astro name was later used for a range of very boring vans.
Corgi Toys Chevrolet Astro 1 Experimental Car, Model number 347, 1/43rd scale, 1969-74. 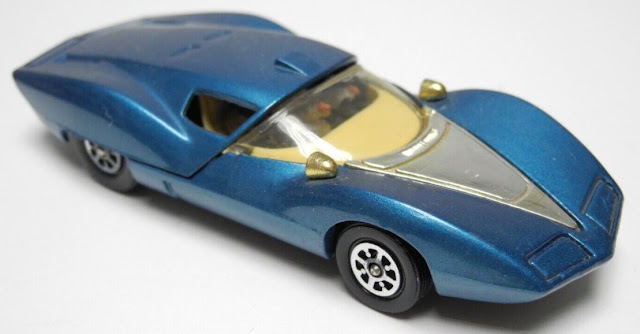 The Corgi model is stunning. The rear section lifts up, as on the real car. The seats are attached to the roof, and they too lift up. This was only the second Corgi model to be fitted with the new low-friction Whizzwheels. Over half a million of these were sold, and the original price was 8/11 (I think that is about 45 New Pence ?). It is 4 inches, or 102 mm, long.
The car in the Corgi catalogue, and on the header card of the box, is red, as per the prototype, but the model was Metallic Blue, with a gold triangle on the nose (the gold finish seems to wear off), and a creamy white interior. One reference book I have also mentions a Metallic Green version.
This car screams James Bond, so why was it never in a Bond movie ? Corgi clearly thought the same thing, and the male driver wears a white dinner jacket and black trousers, just like Mr Bond; while his female companion wears a long, slinky gold dress - she looks like a mermaid.
Corgi Rockets Chevrolet Astro 1, model number 908, 1970-72: 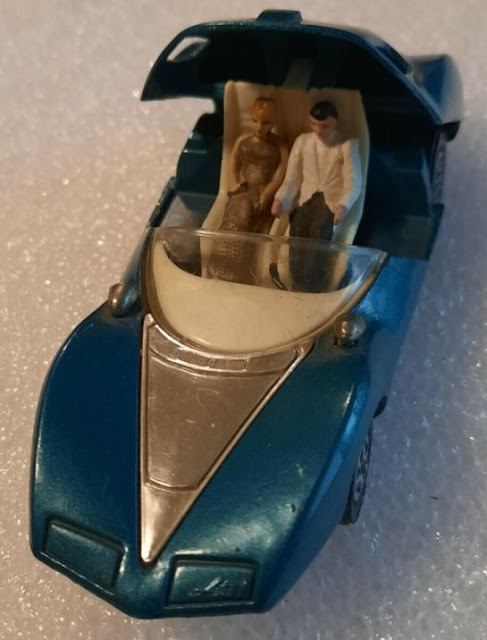 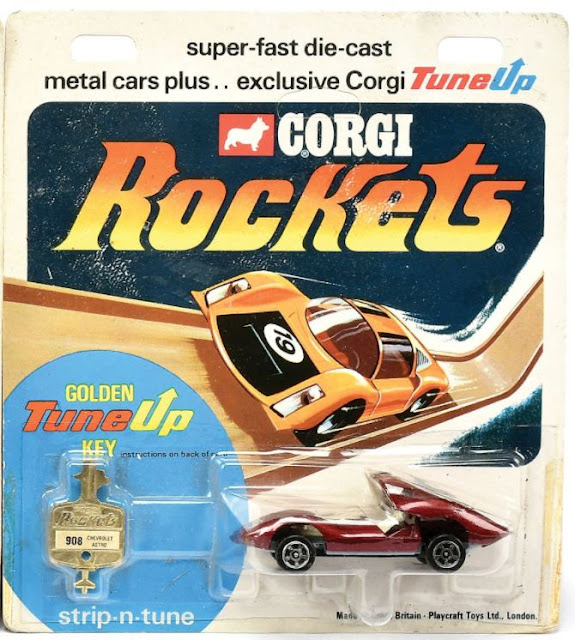 The Rockets were a line of small, Matchbox-sized models with a detachable chassis and low friction wheels. They ran on plastic track like Hot Wheels - and Mattel sued them, with the result that the Rockets line was soon dropped.
The Rockets version has a lift-up rear body, like its bigger brother, but the creamy white interior seems to be fixed. However, it is painted Metallic Red, which is closer to the real car.
I do not have this model, but from photos it looks as though the triangular nose markings may be part of the interior moulding, projecting through a cut-out in the bonnet ? Is this correct, or am I seeing things ?
Corgi Juniors Chevrolet Astro 1, model number 76: The Juniors were a line of Matchbox-sized models by Corgi. When the Rockets were withdrawn, several of the Rockets models were modified - losing the detachable chassis - and included in the Juniors series. This did not happen to all the models, although it seems that it was planned to include the Astro 1.
Reference books vary on this model. Ramsay's British Diecast Model Toys Catalogue says 1971-72. The Corgi Toys pocket book asks if it was produced. Corgi Juniors & Husky Models says Not Issued, but shown in the 1972 Corgi Juniors catalogue in Metallic Red, which would have been the same as the Rockets version.
The photos are mainly from Ebay, with the Rockets model on its card from Vectis Auctions.
Paul Adams from New Zealand
Posted by WOODSY at 00:00

Email ThisBlogThis!Share to TwitterShare to FacebookShare to Pinterest
Labels: Astro 1