Following up from my recent War of the Worlds post, I thought I would flag up the art from the 'Tell Me Why' magazine serilaisation of Well's story. I am 99.9% certain its by artist Terence Cuneo, famous for his military paintings and Hornby Railway catalogue covers. Either way, it is the definitive representation of the Martians and their fighting machines for me.

"The lid began rotating, unscrewing and Ogilvy feared there was a man inside trying to escape"

"A tall funnel rose and an invisible ray of heat leapt from man to man, as each was instantly turned to fire"
"They were inside the hoods of machines they'd made, massive metal things with legs. They attacked us"
"Striding through pine trees and smashing them, cutting through bridges as though they were paper"

"Snake like tentacles writhed as the clumsy body heaved and pulsated"
"I fell helplessly in full sight of the martians, expecting nothing but death" 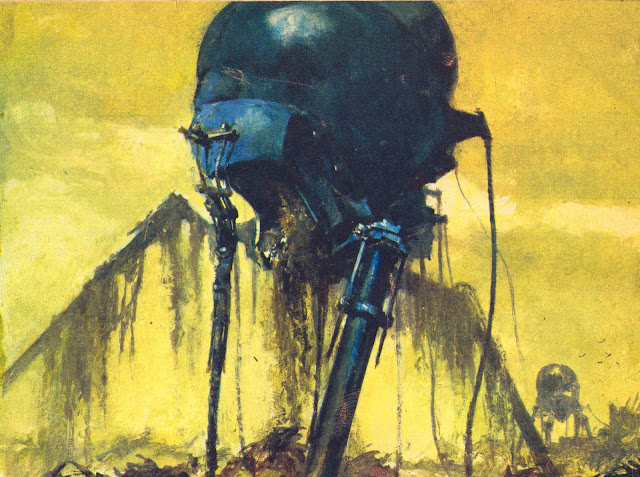 "Out of the hood hung red shreds, at which the hungry birds now pecked and tore"
Posted by WOTAN at 19:30