I found this old Zeon James Bond 007 digital watch during a loft clear out the other day. 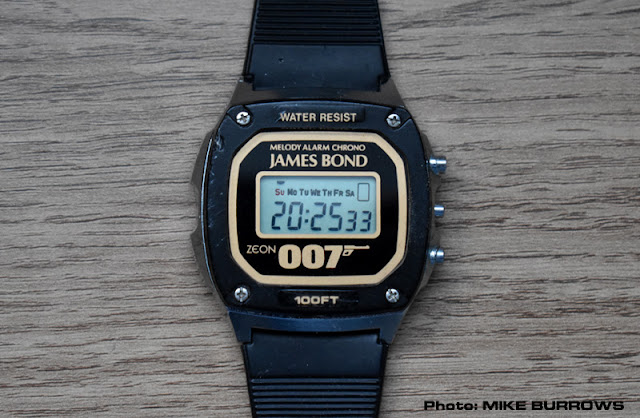 I put a new battery in and was greeted by a melodic digital rendition of the James Bond theme. 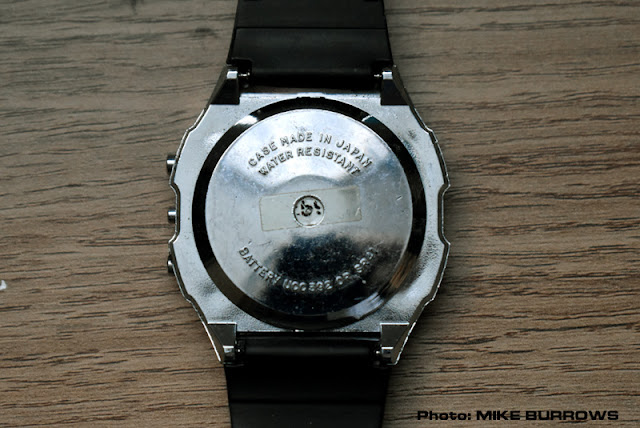 Not bad for something that could possibly be nearly forty years old and probably cost less than two quid when I originally bought it during Sir Roger Moore’s tenure as the super spy. 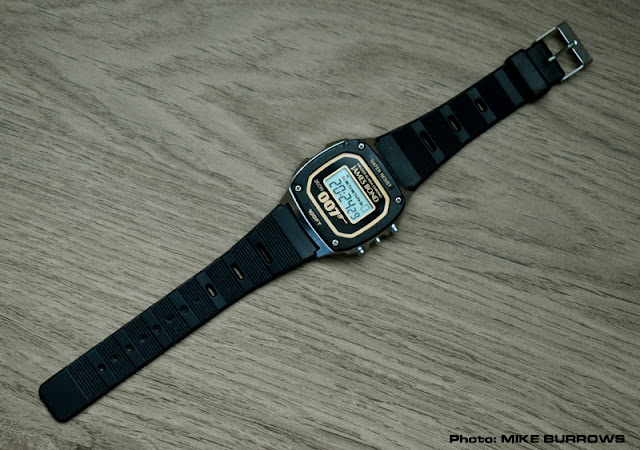 I can’t remember precisely when I got it, but it appears to have come out to coincide with the 1981 release of ‘For Your Eyes Only’. 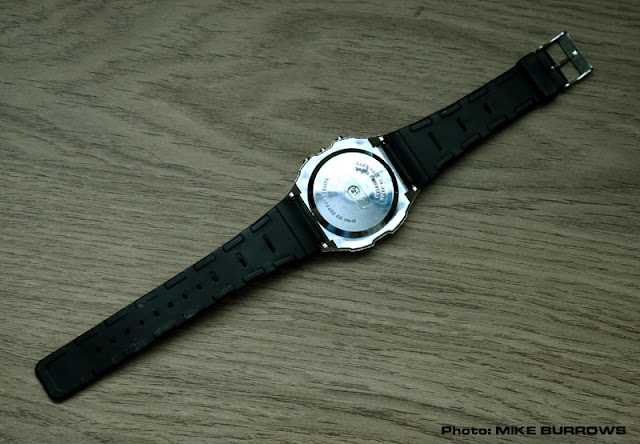 Along with others, Zeon released quite a selection of different James Bond 007 related digital watches. My example seemed to have been released in two slightly different versions of watch face. Apart from mine, one was red with a drawing of Bond above the digital dial. Both shared the same the packaging featuring a drawing of Roger Moore in classic Bond pose. 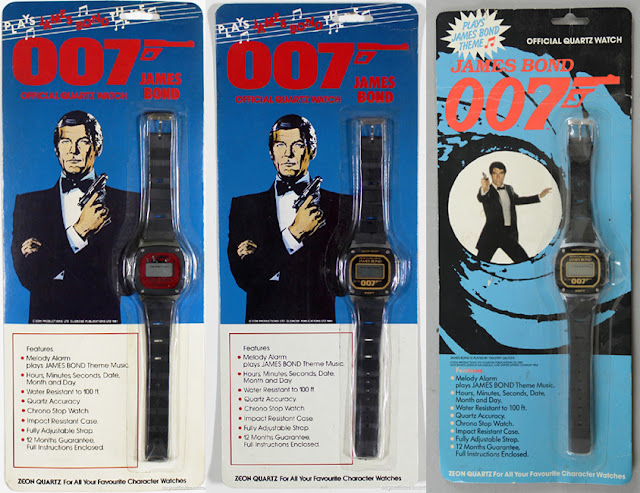 It appears the same watch went on to feature on similar packaging with Timothy Dalton as Bond coinciding with the release of ‘The Living Daylights’. 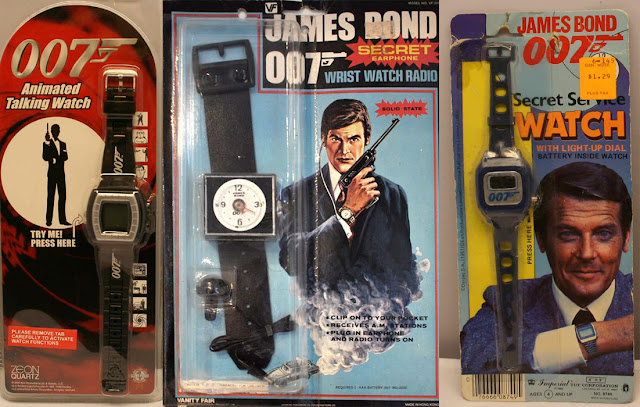 A selection of other cheap James bond watches. One has an illuminated dail, the other is a wrist radio. The Zeon ‘talking’ digital Bond watch from 2000 featured a selection of animated images on its screen.

I can’t say I know too much about Zeon, but after very little research I found that it’s a British company, and the U.K.’s largest importer and distributer of timepieces.
They have done other TV and film related budget range watches, including a Thunderbirds one. However, it’s the cheap range of Bond watches that interest me, as I love the nostalgic tacky look of this low cost piece of Bond memorabilia. I love the packaging on this version. 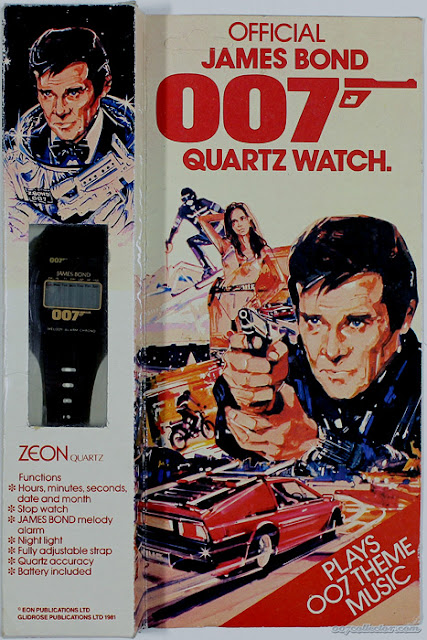 'For Your Eyes Only'...Quintessentially kitsch! 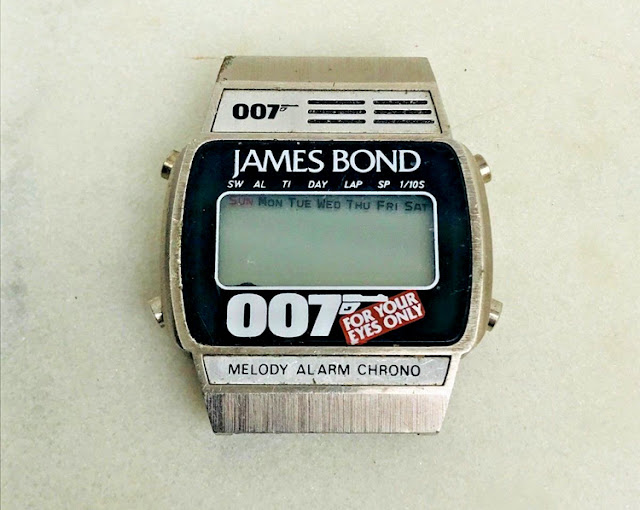 When it comes to Bond timepieces, I can’t see myself being in the position to afford a new Omega Seamaster 007 Edition anytime soon, or even a second hand Rolex Submariner.  Both would easily set you back several thousand pounds. 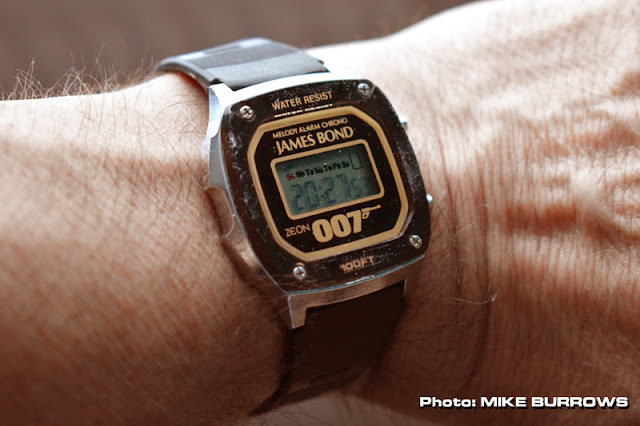 An old tacky 007 Digital Zeon which plays the Bond theme better reflects my more moderate circumstances, although to be  fair I did see  one just like it go for sixty quid the other day on eBay, so maybe not so cheap nowadays.