The Corgi 497 Man from U.N.C.L.E. Thrush-Buster designed to cash in on the popularity of the sixties T.V. spy series. 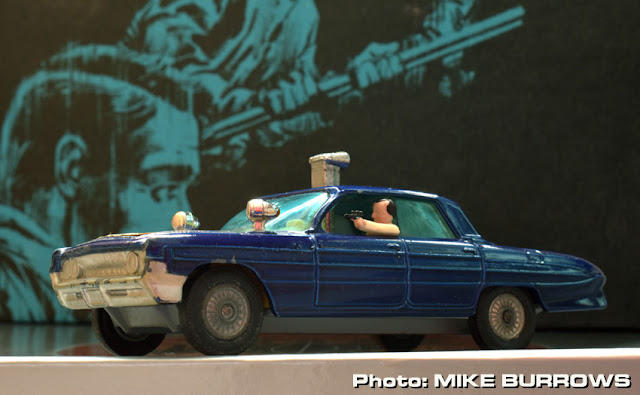 I’m sure the majority of collectors or fans of the series will already be aware of most of this info, but for those who might not the model came in two colours, a more common dark blue and rarer creamy white. 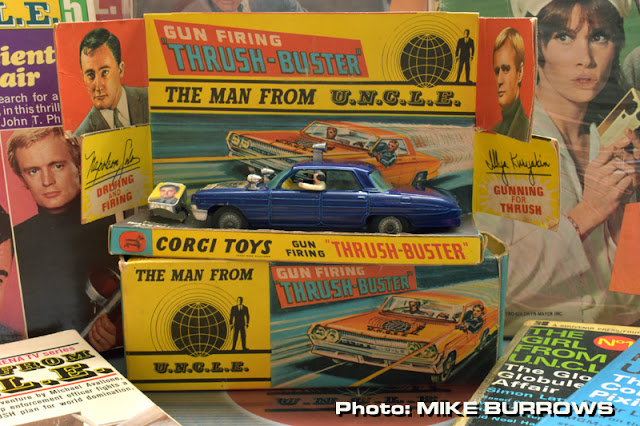 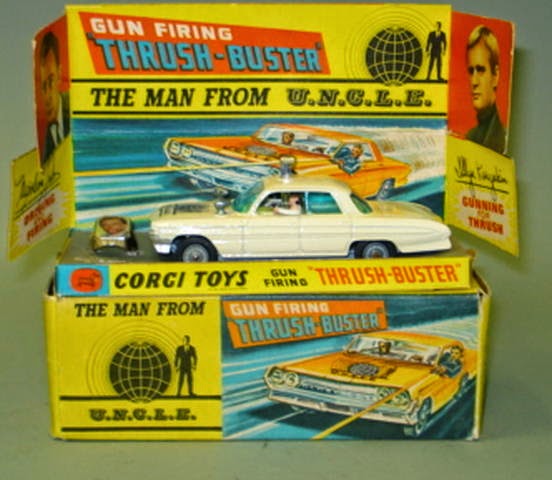 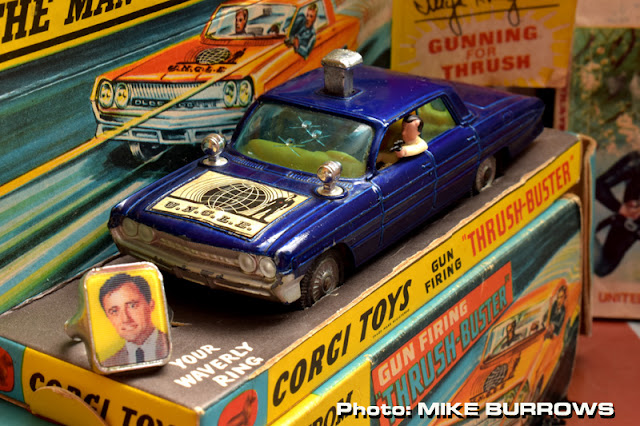 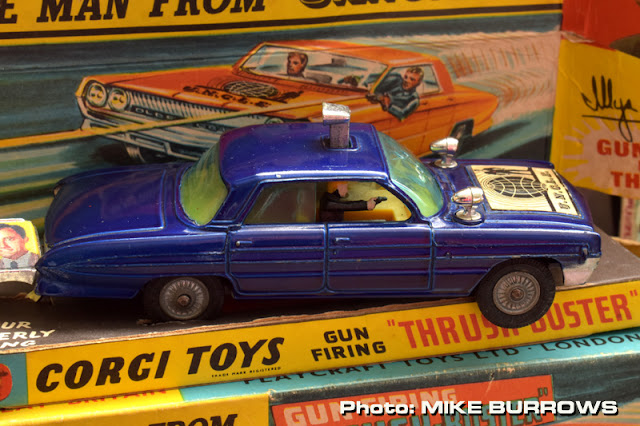 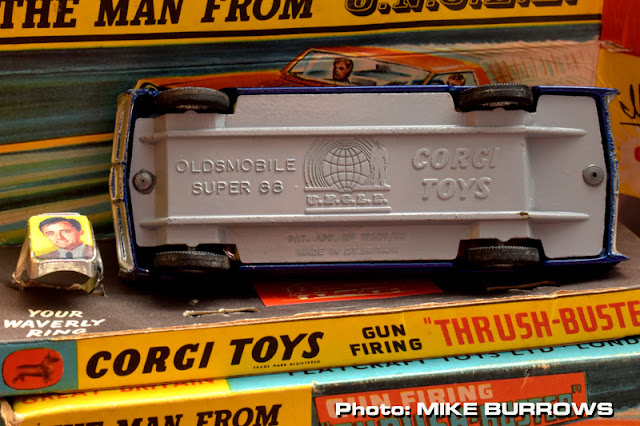 Apart from the obvious colour difference, the searchlights on the first versions of the blue car have plain metal searchlights, the second versions are chrome. The creamy white version has plain metal searchlights like the early blue model.  The blue has a yellow interior; the creamy white has a cream interior. I’m told there is also an ever so slightly lighter blue version of the car with chrome headlights, although hard to spot unless you have a dark blue version for comparison. 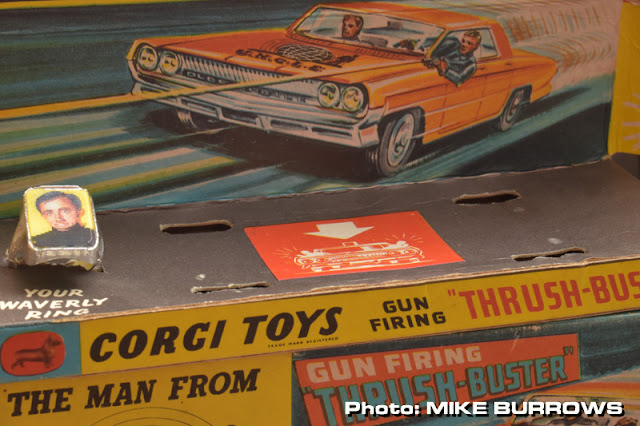 For anyone with original packaging there’s apparently a slight difference in the colour of the periscope instruction diagram on the display plinth. Put simply, one’s white and one’s red. 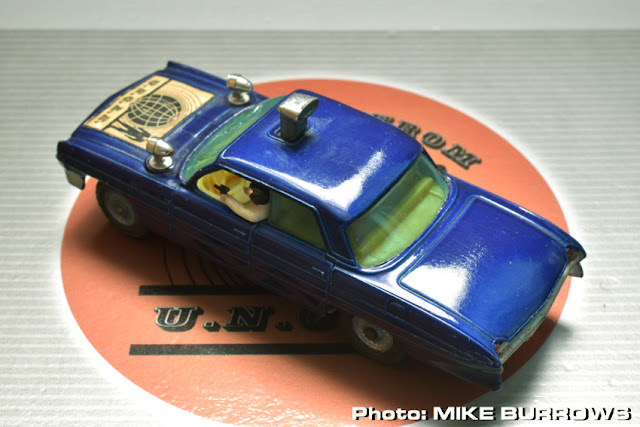 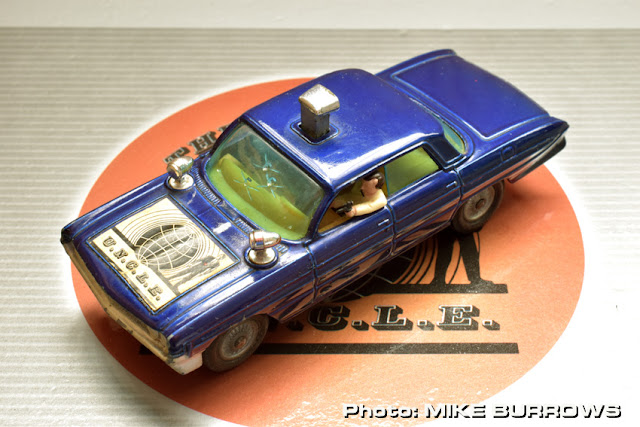 It originally sold for 8/11d and isn’t based on any particular U.N.C.L.E.  Car featured in the series. 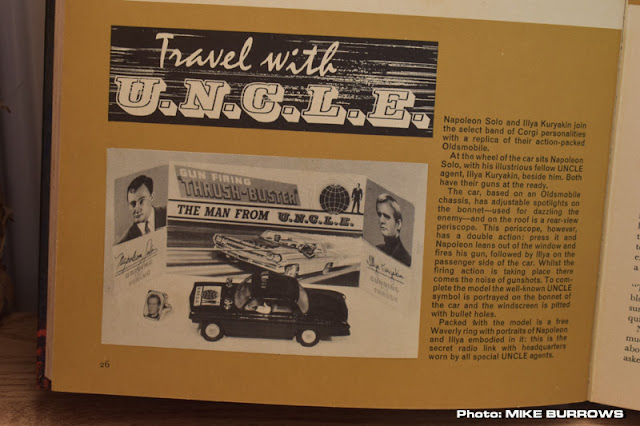 It even got a mention in the second of the four World Distributers Man From U.N.C.L.E. Annuals.

Following on from the gadget ridden James Bond DB5, the makers of the Man from U.N.C.L.E. needed their own star car.

The original U.N.C.L.E. car was to be based on a V8 fastback Dodge Charger, a brand new mid-range passenger car. A classy looking American muscle car, but it seems the network had second thoughts, thinking the manufacturer would benefit from a lot of free advertising, so the Dodge Charger was dropped.

The Dodge does appear in a few episodes, but if I’m honest; to me it looks like just another huge unwieldy American gas guzzler.  I certainly didn’t register its appearance when I watched the series as a youngster. 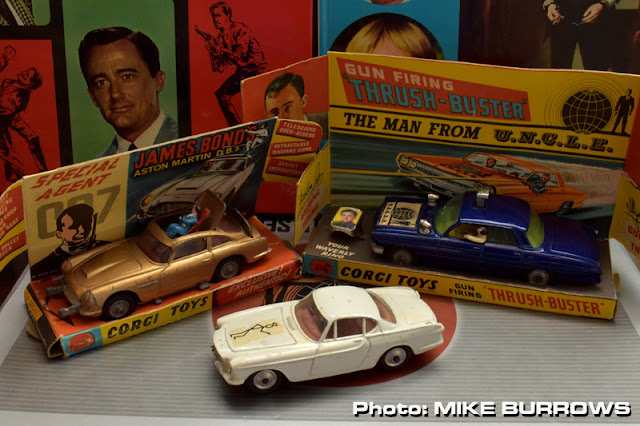 However, in 1966, Corgi was riding high on TV and film related die-cast models after the releases in 1965 of The Saint’s Volvo P1800 in March, and the runaway success of their Aston Martin DB5, released in October. In 1966, the T.V. Avengers Gift Set appeared in January, and Corgi now needed an UNCLE car. 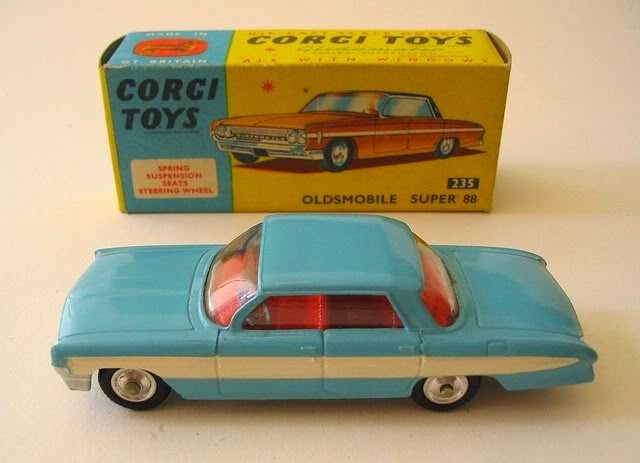 With no gadget –heavy gimmicky spy car to base things on, Corgi chose to use one of their already existing models based on an American V8 4-door sedan; a 1961 Oldsmobile Super 88. 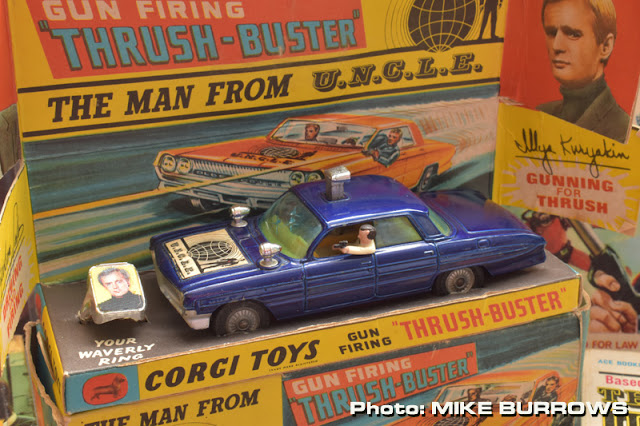 The model was modified to give it an U.N.C.L.E.  upgrade, and released in August, 1966.   A gun toting Napoleon Solo is at the steering wheel leaning out of the window. Press the periscope on the roof of the car and Illya Kuryakin flicks out from the passenger side. 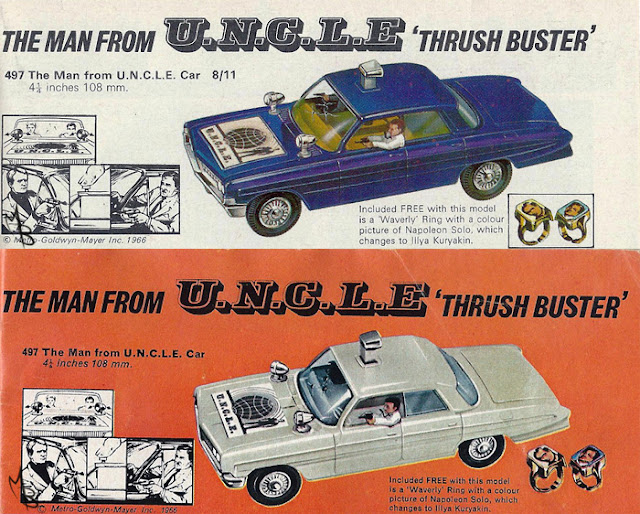 There’s a pair of swivelling searchlights in front of the bullet-holed windscreen, and there’s a U.N.C.L.E. logo sticker across the bonnet. There’s also the U.N.C.L.E. logo moulded into the base.

You also get a ‘Waverly Ring’, which features a simple 3-D effect showing Napoleon or Illya.  As this is probably the first thing that gets lost, there are plenty of very good reproductions on the market. An original ring will generally show Illya wearing a shirt and tie, while reproductions usually have Illya in a dark polo neck for some reason. Incidentally, there is actually a season 2 UNCLE episode called, ‘The Waverly Ring Affair’, in which UNCLE chief, Alexander Waverly, equips Solo with a jewelled signet ring, a symbol of faith in his top agent, and something which  can only be removed safely by Waverly himself. 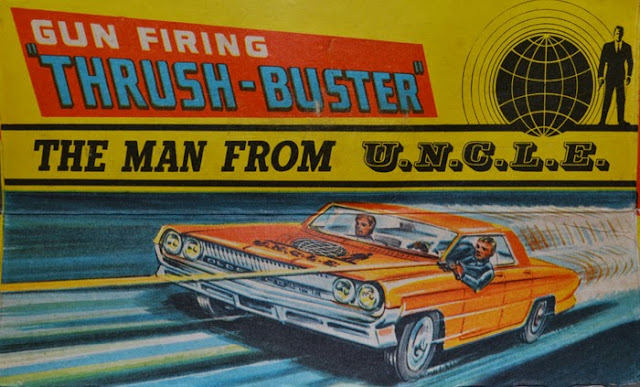 Corgi came up with some colourful eye-catching packaging not unlike their gold coloured James Bond Aston Martin DB5 model 261, with a longer display plinth to accommodate The Waverly Ring.

It was hardly what I would think of a superspy car, though. Not that there’s anything wrong with an Oldsmobile, I imagine it would be perfect for undercover or surveillance work, although the U.N.C.L.E. logo across the bonnet might be a bit of a giveaway! 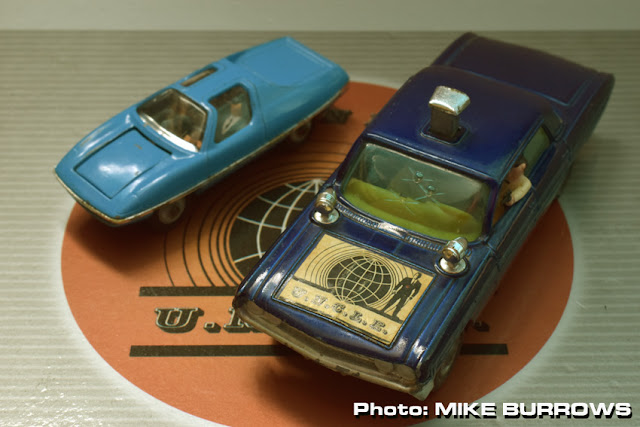 That being said, it’s still a nice nostalgic piece of original UNCLE merchandise.
However, it might seem that Corgi jumped the gun, as during the series’ third season which aired from 1966 to specially built new vehicle was introduced, a proper UNCLE car with flame throwers, rocket launchers and bullet proof screens – The Piranha! 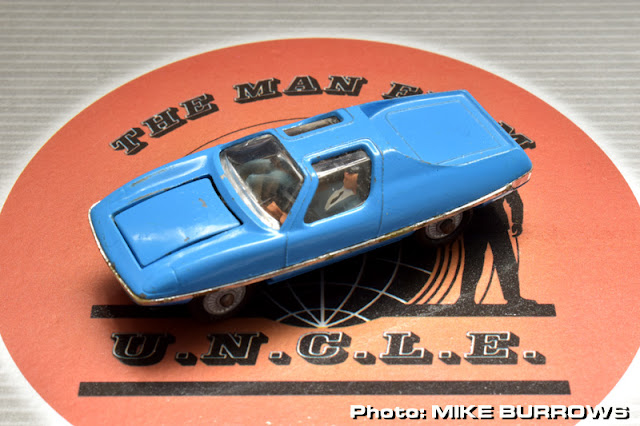 This low slung plastic bodied sports car was designed by the late Dann Deaver and built by famed car customizer Gene Whitfield, notable as having designed the original Star Trek Shuttlecraft, and later, The Spinner from Blade Runner. 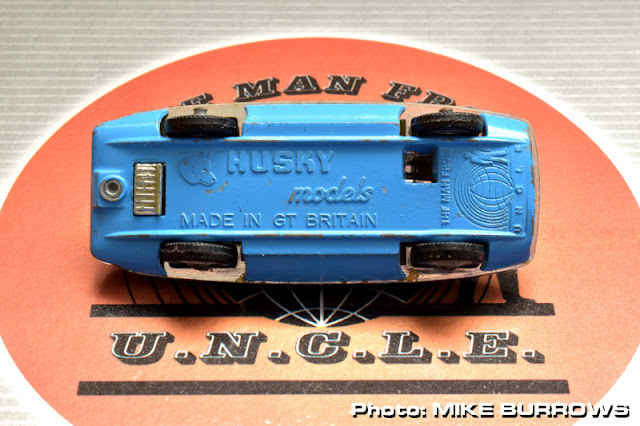 Corgi did a small 1:64 scale Piranha as part of their Husky range – The Man from UNCLE Missile Firing Car. This was painted in a similar pale blue colour to what was seen in the TV series, and contained figures of Solo and Kuryakin. The firing mechanism was operated by pressing down the front wheels of the car; the bonnet flicked opened and fired a spring-loaded missile. This model was rebranded in 1970 as a Corgi Juniors on a carded 4” x 4” blister pack for 3/3d. It also came as one of the vehicles in the Corgi Juniors ‘Crimebusters Gift Set’.

In the U.K. UNCLE fans would have got a brief look at the Piranha in glorious Technicolor when the T.V. two- parter story, The Five Daughters Affair was theatrically released in cinemas re-titled, The Karate Killers. 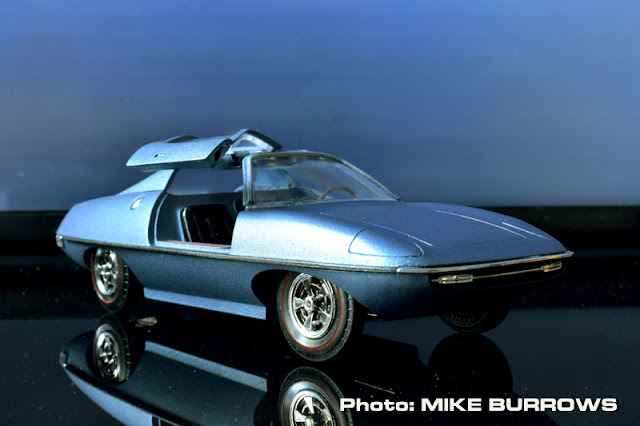 However, when it came to Piranha models, the one to have is A.M.T.’s Super Spy U.N.C.L.E. car. I’ll have a look at that model in a future post.