The Space Club That Never Was By Arto 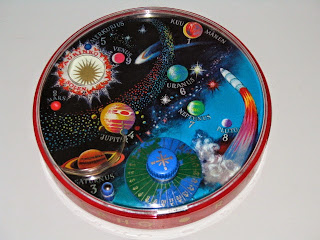 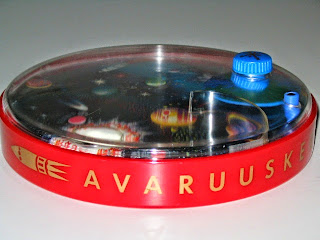 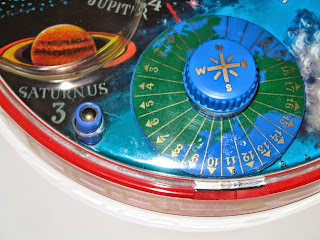 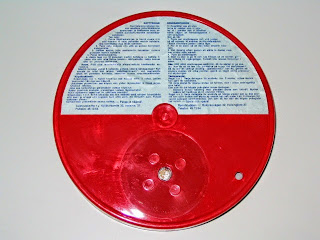 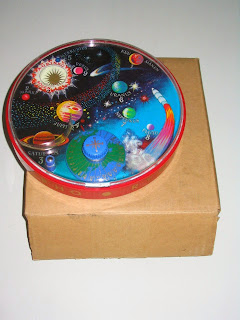 Mystery Moneybox, or a Space Club that never was by Arto
[first posted in 2012]
Having recently covered a piece of Finnish moneybox production that made its way also to the U.K., one additional moneybox is worth noting in its own right. Around 1967-68, a small plastics company Takuuvalmiste produced a quantity of moneyboxes depicting the Solar System. Actually more like a bagatelle game of sorts, the idea was to hit a chosen planet with the inserted coin by adjusting the dial, and then releasing the spring mechanism by pressing the button. Eventually, the coin would inevitably disappear in the fiery slot of the Sun.

The moneybox was made to promote Avaruuskerho, or Space Club (name printed on the rim both in Finnish and in Swedish), an association registered in April 1967 by Mr. Levi Hellberg, the managing director of the aforementioned Takuuvalmiste. According to its rules, the purpose of the association was to promote advances in space science, and encourage people in saving money. How these two aims were supposed to come together - apart from producing a space-themed moneybox - nobody knows.

Mystery remains as nothing is known about the activities of the Club, just this moneybox. Peculiarly, when they still used to come up at fairs a few years ago, they were always brand-new, often still in their in their plain brown, unopened cardboard boxes. To this day I have not come across an example in used condition, with coins inside. Asking around, I managed to trace the dealer who had found a quantity of sealed boxes in a forgotten warehouse where Takuuvalmiste had their production facilities. He told me that all in all, some 360 completed and boxed examples were found on the site. As there were also unassembled parts lying around, I took it that the production process was halted abruptly and the stock was left undistributed.

There seems to be a very good reason for this, albeit a very tragic one. In June 1968, a small plane carrying Mr. Hellberg and his family crashed at Helsinki-Malmi Airport soon after take-off. Piloting the plane was Mr. Hellberg himself, a devoted aviation enthusiast and even a wartime fighter pilot. He was also the only one killed in the accident. As Takuuvalmiste was sold soon after, it is my assumption that whatever grand plans Mr. Hellberg had for the Space Club, they were halted all too soon, with moneyboxes forgotten for decades onto their production site.

Shortly before his passing in 2009, the dealer who bought the initial lot told me having sold the remaining quantity to a U.K. dealer. However I have not traced any evidence of this, as it would be likely that by now some examples would have ended up on the internet market.

Email ThisBlogThis!Share to TwitterShare to FacebookShare to Pinterest
Labels: Finland