Thunderstruck! Reflections of a Rookie at Fanderson's TV21 Con.

Well fellow Swordfolk, I'm back from the Fanderson TV21 convention in Bristol. My very first 'con'. It's hard to describe how absolutely brilliant it was and how much I enjoyed every minute but I'll give it a go. After a four hour drive to Bristol on Friday morning, Mrs. Moonbase and I checked into our hotel and went for a stroll both to take in the sights and for me to enrol. We took Bristol's very own [nuclear] Ferry down the harbour enjoying the pastel coloured houses nestling on the banks. Around 3pm, with rookie apprehension, I registered at TV21, got my name badge and goodie bag and sampled my first 'con' air! As Mrs. Moonbase wasn't attending we then went for an evening meal at the wonderfully grungey Mud Dock cafe lit with simple candles dripping down wine bottles. It brought the hippies out in us and set the scene for a nostalgic weekend. 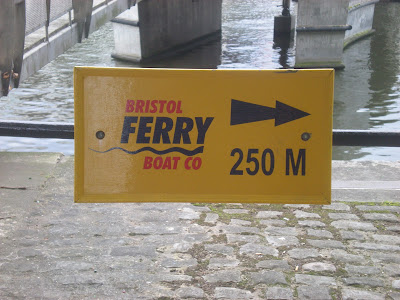 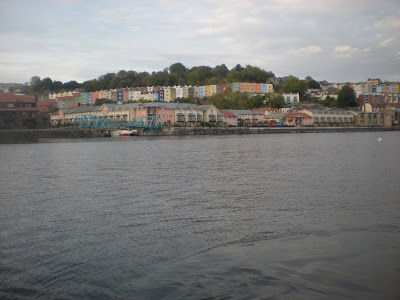 On Saturday I attended the con proper and like the newbie I am, name badge firmly fastened to my Star Wars T-shirt [yeah, I know, wrong series!] I crept into the large auditorium below complete with TV21 neon sign [later auctioned!] and superb screenings of Four Feather Falls, Space 1999, UFO, Thunderbirds and more shows than you could dangle a puppet at, many of which were in HD.

[PS. anyone know what the red jet is on the screen?] 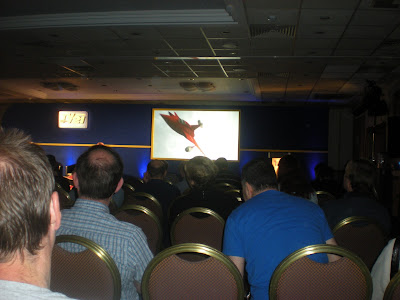 Over the weekend I was very chuffed to bump into a few blog pals, which made the event extra special for me as it's always nicer to share your experience with people you know:
....above, the superbly friendly Mike Burrows. Note the SWORD badges! hee hee. Mike is an old hand at Fandercons and attended the very first one in Leeds in 1981! 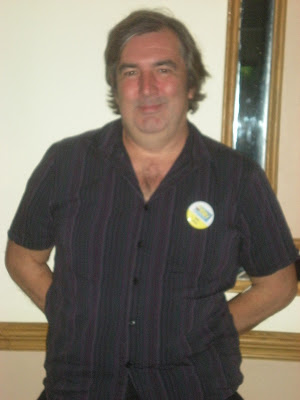 .... and the sublimely pleasant John 'Swan', who attended the first workshop of the con about the TV21 universe [I missed it] and yes, John tells me Project SWORD got a mention! 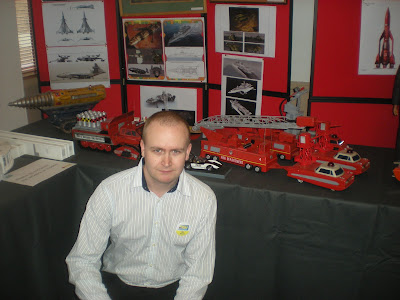 .... and the mightily talented Mike Delamar with his amazing Thunderbirds Fire Tenders, made from scratch, featured in the exhibition room 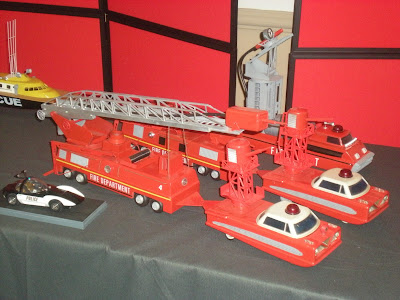 ...and perhaps my own personal highlight, meeting up with the gentlemanly Alan Shubrook, C21 modelmaker, photographer and blog supporter!
Someone else I met, but didn't photograph, was Dennis Nicholson, author of the definitive Gerry Anderson Memorabilia Guide in the early 1990's. I was thrilled when he called me 'Mr.SWORD'! hee hee [I know, I'm sad!]. Dennis and his tome were one of the main reasons I got into collecting Century 21 back then and was so excited when Dennis announced, during his 'digital' collecting workshop, that the 'Guide' will be available in revised form and in colour as an 'E-book' during 2011! Luckilly for me this was only the second Fandercon Dennis had attended after debuting at the very first one in 1981!

Another Fanderson first! Besides all the people, there was lots of 'stuff'. Here's a gallery of the amazing 'exhibition' room. 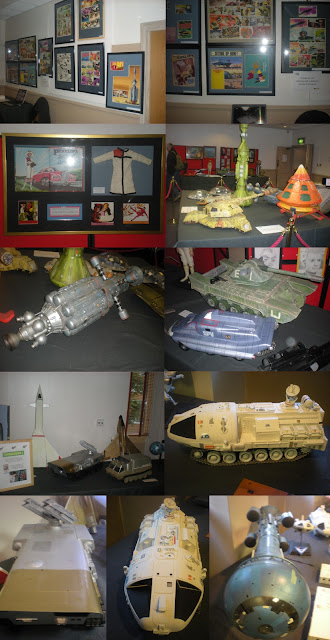 The above shot includes original TV21 and Joe 90 comic art on display, courtesy of Graham Bleathman. Fantastically it included the original art for the Saturn Probe page I blogged the other week complete with a MEV 2 descending from Shindig 1. Art by Chris Harrison. The fab models were  loaned by different modellers including probably my favourite, Mike Delamar's RESCUE boat [below bottom left], based on Derek Medding's original design complete with plastic Vosper toy boat base!

Also on display was this detailed interior model of Thunderbird 2 [below] and description panel, which included a Finnish Thunderbirds comic [one for Arto!]. 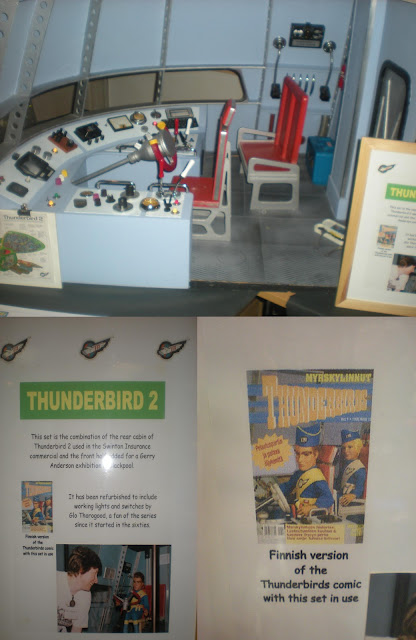 But probably the most exciting aspect of the con, for rookies like me and old hands alike, was meeting the people behind all those cool anderson TV shows. I didn't catch everyone [e.g. John Blundell and the Terrahawks creators] but I did see... 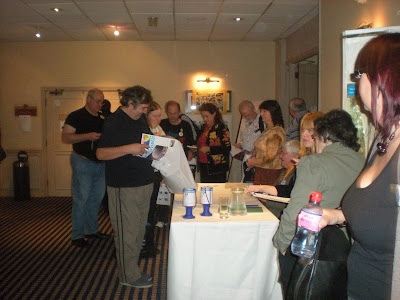 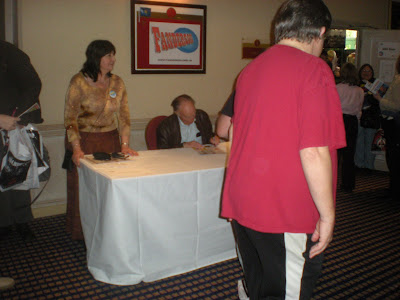 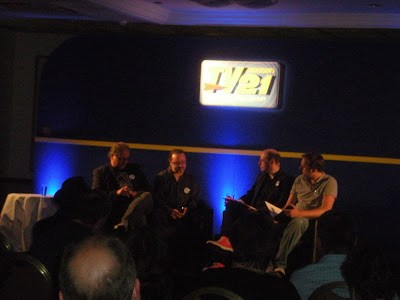 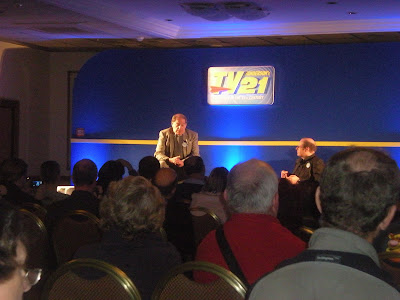 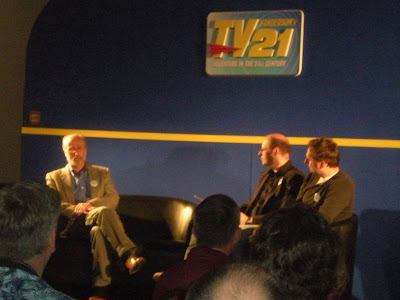 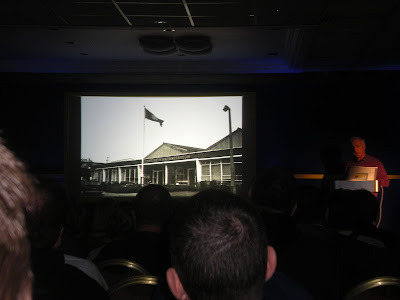 ... Century 21 modelmaker and photo-archivist, Alan Shubrook, during one of his two talks [note the on-screen photo of C21 Slough!] 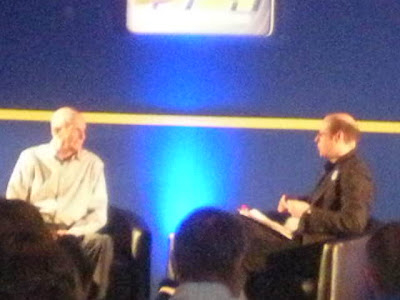 ....and, yes, Gerry himself on the interview stage. He spoke about his past achievements, the current convoluted ownership of his shows and future projects like the andersonized Royal Mail stamps this coming January! 21 lucky folk also got to meet Gerry afterwards and have items autographed [not me I'm afraid]. It was superb to see the great man after being first thunderstruck by his genius 45 years ago. 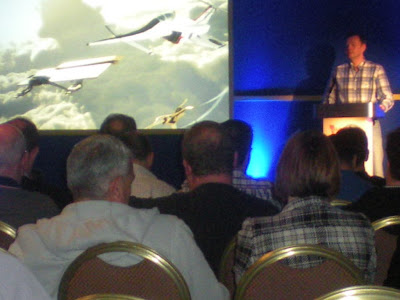 ... last but certainly not least, Nick Williams, Fanderson's Chairman, who kept the whole event moving often doubling as an auctioneer of snap items being sold for the Wallace and Gromit charity throughout the weekend. Nick caught the elated mood of the con, contrary to the doom and gloom in the country, in his emotional closing speech. He was left in no doubt about how much everyone had enjoyed TV21 and the demand for another!

Another highlight for me was having my prize SWORD Cape Kennedy Set box lid [below] signed by Shane Rimmer, Gary Files, David Graham, Mike Trim, Alan Shubrook and Dennis Nicholson! FAB! I also, like many delegates, took advantage of the special low price of Shane Rimmer's autobiography, which was launched over the weekend. Again, Shane kindly signed it. Alan Shubrook also signed a few items for the entrants of the blog's SWORD art competition! More on this later! To complete the whole experience, Fanderson had created a unique TV21 - style comic, which came in the delegate pack along with an Agent 21 badge, a con TV21 name badge, a C21 EP mini disk and lots more. 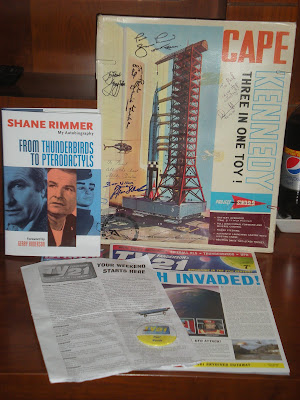 And finally, amongst many brilliant moments over the weekend, here are two I managed to snap: Shane Rimmer signing a Lady Penelope lookalike's dress and Parker the Butler stealing the show in the foyer!

Well done Fanderson! There was no need for me to be apprehensive, everyone was completely welcoming and my first convention was totally FAB!

PS. This short fan film played three times at the con, all of which I missed. But, I've just watched it on You Tube! You can too: THUNDERBIRDS 2010.
Posted by WOODSY at 22:11