THE MANTA FORCE IS STRONG IN THIS ONE

I recently acquired this small collection of boxed MANTA FORCE. It's not a toy-line I'm overly familiar with and as such it's in the same mental folder as STARCOM and MASK. By Bluebird in the 1980's, they really are massive vehicles with hidden craft, accessories and neat miniature figures. And the boxes are HUGE! Those lucky 5 year olds back then would have been able to get inside them! A thought popped in my head, were they the SWORD/SPACEX of their day? Well, I was amazed when I read the backstory on Wikipedia, it's so similar to PROJECT SWORD! See what you think:
"Manta Force was a toyline produced by Bluebird Plc in the 1980s. MANTA was an acronym for Multiple-Air-Naval-Terrain-Assault Force, which referred to both the "good guys" and their spacecraft, searching the galaxy for a "New Earth". Their foe was called Viper Squad, who traveled in a spacecraft called Red Venom. The back-story involved the sending of a spaceship to find a "New Earth" for colonization by the World Government, given the overpopulated and polluted state of Planet Earth. The Viper Squad aimed to take over MANTA and colonize the New Earth themselves.
The plastic toyline consisted of small toy soldiers and much larger spaceships, as well as a "battle fortress". Several of the guns were capable of launching plastic projectiles, including the infamous "Zip Gun", a hopper-loaded, gravity fed. crank handle operated design that launched 5mm plastic spheres at an extremely high rate for a distance of around eight feet.. There was a series of books as well as a cartoon strip in the Eagle comic.
Bluebird Plc. also produced the Polly Pocket toyline, for which reason the company was purchased by Mattel.
Later the two opposing sides joined forces to fight off attacks from an alien known as Karnock who was served by an army of robots. Another enemy emerged as well in the form of Stinkhorn who lead the 'vile' Stenchoids who appeared to be either another alien grouping or the native dominant lifeform on New Earth." (Wikipedia)
Stenchoids! I love it!
Inside one of the boxes was this cool leaflet in French.

and also these other as yet unidentified toys 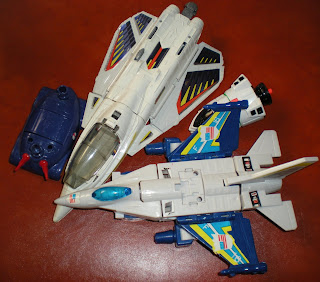 What do other people think about MANTA FORCE? And for that matter STARCOM too?
Posted by WOODSY at 19:20