A LOOK AT SUGAR SMACKS BADGES: 1

Remember those free badge promotions featuring  Gerry & Sylvia Anderson's Captain Scarlet and Joe 90  TV series, that were given away  inside boxes of Kellogg's Sugar Smacks during 1968.

There was six in each set  but as you had no idea what you were going  to get in the packet you were bound to end up with a one or two duplicates of a badge you already had, which meant time for some swapping with your mates.

The first set of six badges features characters from Captain Scarlet and Mysterons. 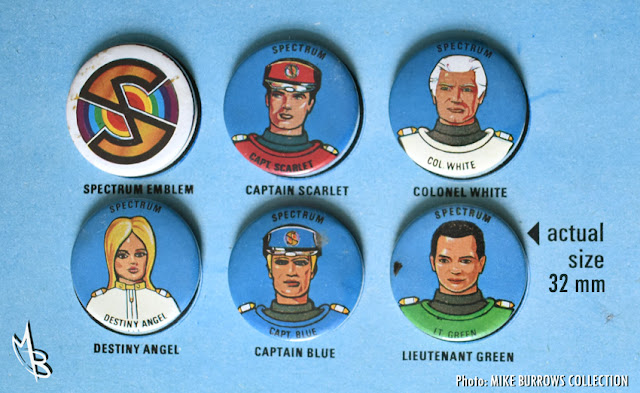 Five of the badges have a simple head and shoulders painted depiction of familiar members of Spectrum - Captains' Scarlet & Blue; Col. White, Lt. Green, and Destiny Angel , whilst the sixth has the Spectrum emblem. 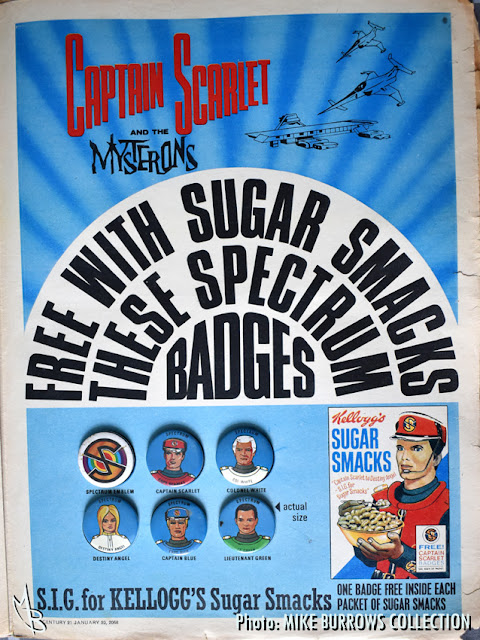 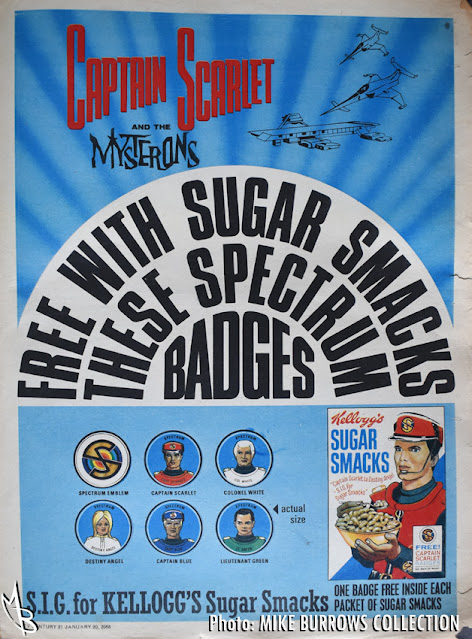 The badges were promoted using this colourful eye-catching comic  advertisement. This one shown is from TV Century 21 , dated January 30th, 2068.

Television advert for the badges: https://www.youtube.com/watch?v=rSf_mXM3Fxw

A brand new set of six badges showing characters from Joe 90 were given away.

Each badge, was again a simple painting, in the same style of the previous Captain Scarlet ones, presumably Kellogg's used the same artist. 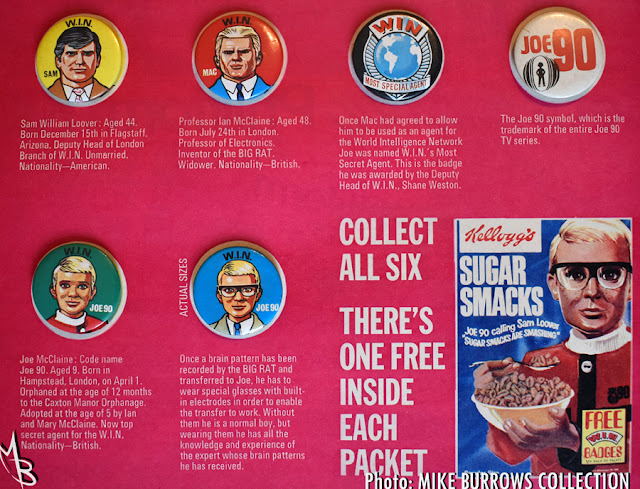 You got Joe 90 with his special glasses, Joe McClaine without, Prof. McClaine, and 'Uncle' Sam Loover. The other two show the World Intelligence Network badge, and finally the Joe 90 series logo. 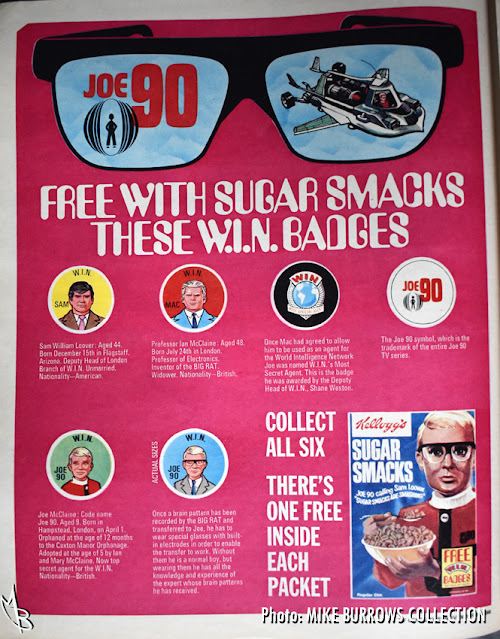 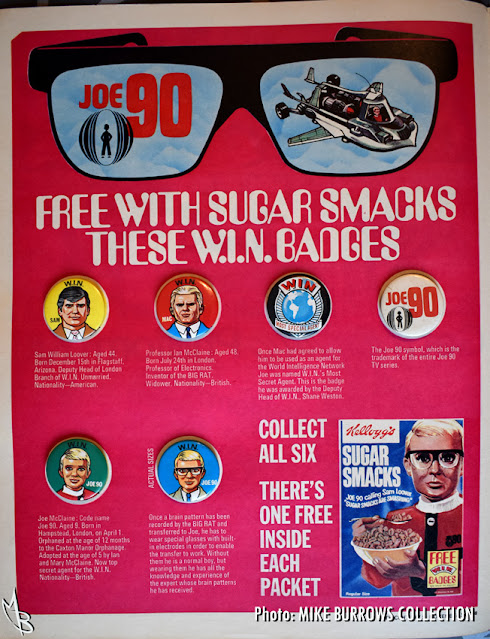 There was also another colourful advert. This one from TV Century 21, dated November 30th, 2068.
Television advert for Joe 90 badges: https://www.youtube.com/watch?v=XZ3mGWimnMk

A bonus ninth birthday card badge, not part of the set but I think it's a nice addition. Was Joe 90 as popular with you once you turned ten?

I should add, even though it's not a breakfast cereal, that Lyon's Maid had their own somewhat underwhelming free Joe 90 badge promotion. By sending five tokens from Zoom iced lolly wrappers, you got in return a free Joe 90 badge. 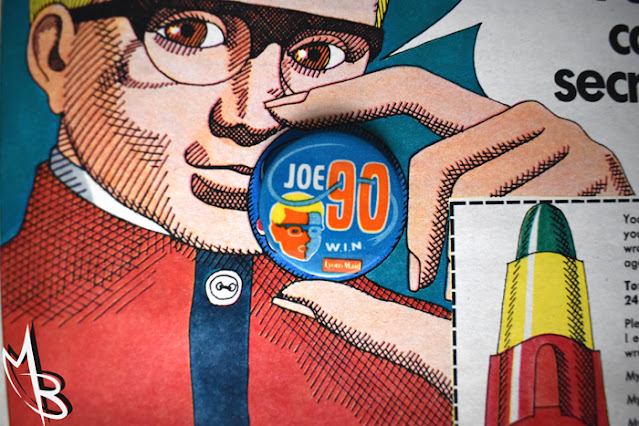 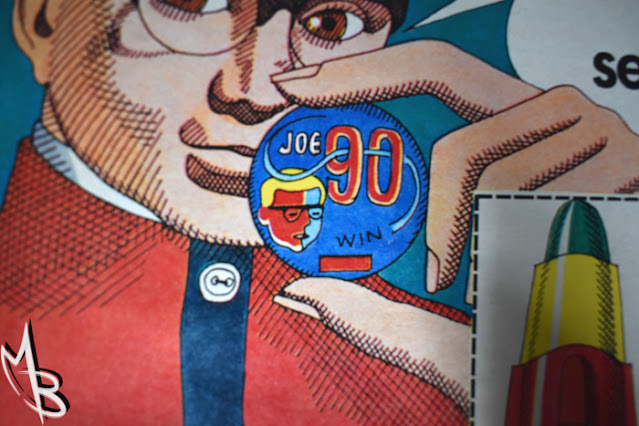 This was the same size as the Kellogg's one, 32 mm, but has nothing written on the rim. 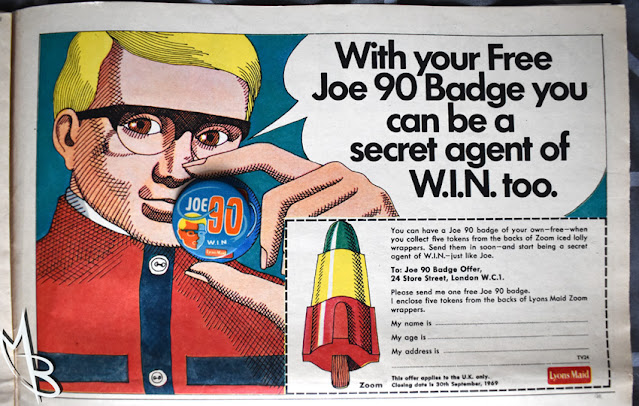 Back to Captain Scarlet, and I must admit these badges shown are a bit of a mystery to me. They look pretty good , and there's plenty of them about, too many to be bootlegs. People tend to describe them as cereal give-aways, but as yet  I can't find any precise information about them. 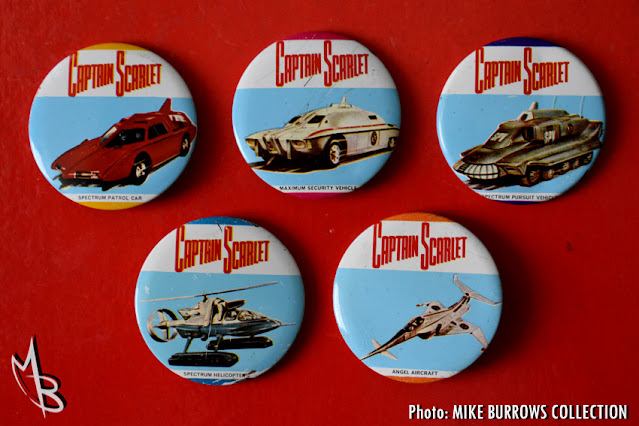 The five badges, which at 38 mm are slightly bigger than the Kellogg's and Lyon's Maid examples, show vehicles from Captain Scarlet, using art from the specification sheet that would have been given out to artists and advertisers at the time.. As I mentioned, they are often rather vaguely described as vintage, and from some un-named cereal promotion. I must admit I don't remember seeing  any promotional adverts for them or which cereal, if any produced these badges. Could they have been a freebie with packets of tea, or sandwich spreads? Heck! they might not have even been free!

Has anyone out there got any info on them, or better still an advertisement ?