Hi
The recent post on the Nancy Drew board game was most interesting. One thing I noticed was that the locations on the gameboard are mainly based on various book titles.
The Secret of Red Gate Farm (1931)
The Message in the Hollow Oak (1935)
The Mystery of the Tolling Bell (1946)
The Mystery at the Moss Covered Mansion (1941)
The Haunted Bridge (1937) - see picture
The Ghost of Blackwood Hall (1948)
The Sign of the Twisted Candles (1933)
The Secret in the Old Attic (1944)
The exceptions appear to be Moon Lake, the Spider Web, and the Drew Home.
The game was made by Parker Brothers Inc. The copyright date is 1957. This box has different artwork; and a later date, 1959, on the green star on the box top. The actual gameboard is the same as in the 1957 version. The rules are printed inside the box lid. Playing pieces include the usual round plastic counters, and four small plastic motor cars. For 2, 3, or 4 Players. Nancy is still carrying a torch.
VINTAGE NANCY DREW MYSTERY BOARD GAME ~ PARKER BROTHERS ~1957 | #2075452034 (worthpoint.com)
Much later, there were also Nancy Drew computer games.
Photographs from Worthpoint. 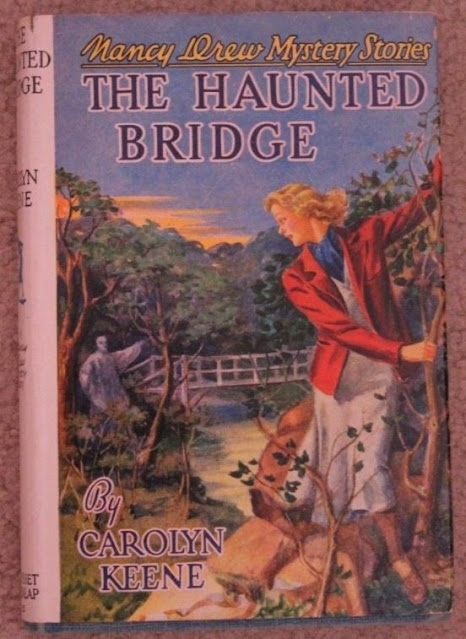 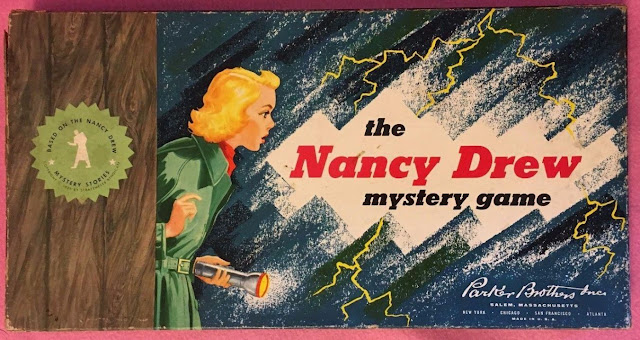 Paul Adams from New Zealand
Posted by WOODSY at 00:00

Email ThisBlogThis!Share to TwitterShare to FacebookShare to Pinterest
Labels: Board Games, Nancy Drew and Kids Mysteries