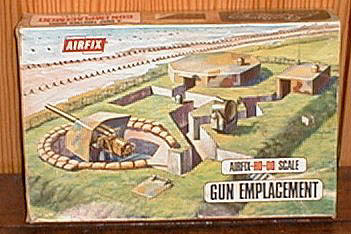 Way back in 1969, when Airfix was one of the heavy hitters of the British toy industry, they expanded the model line to include a little more play value, by adding in items which could be played with more directly, than a model. To complement their line of polythene OO/HO military vehicles, Airfix introduced some interesting playsets, such as the Pontoon Bridge, Coastal Defence and the Gun Emplacement.

More toy than model, but with some assembly needed, the Gun Emplacement was the perfect base to use with the small 1" figures. It had a spring loaded cannon, searchlight, two pillboxes and a series of trenches to equip with troops to defend the border. At the time, I was more into the larger soldiers at 1/72, but I still found this little model fascinating.

Its apparently been re-issued several times, according to Vintage Airfix https://www.vintage-airfix.com/gun-emplacement-p-742.html  - but for various reasons I never bought one at the time. On ebay recently, I found a pair at a very modest price, one 99% complete and another at around 80%.

The more complete one is missing a hatch cover and an aerial as far as I can see, but is a lovely compact piece of design, as demonstrated by some Zero Hour Troops above. At around 10" long, its a lot of feature packed into a small area. 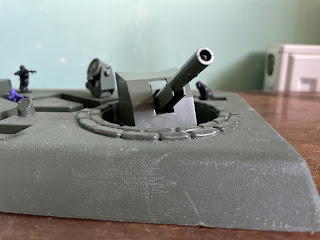 The gun is ideal for shooting matchsticks for when you lose the included shells, to cut down invading forces and there is enough surface detail for it to be used in a diorama or to accompany other lines, such as Triang Battle Space Trains. 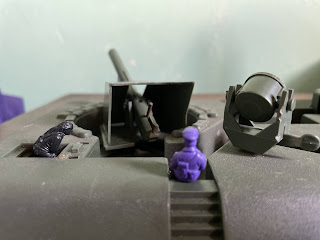 The second one was missing the base of the gun platform and the searchlight array, so I decided it would become an Early Warning Radar Station and fitted it out with a scratchbuilt radar, generator and armoured nissan hut cover. 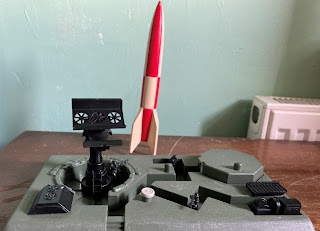 Having seen so many secret rocket bases on Quatermass and other cold war movies, I wanted to get a post-war feel to it, without looking contemporary. 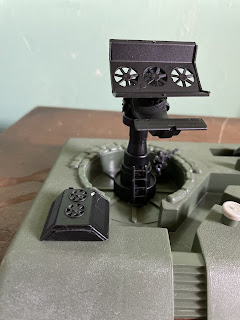 The generator and part of the radar are made from parts of a diesel train model, fitted out with some greebly from the bit box. 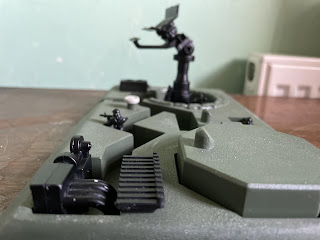 I'm going to hold off painting either model, aside from some matt black on the new parts, as once it starts down that route it becomes more of a real model, as opposed to a toy-like go-between, which I much prefer. 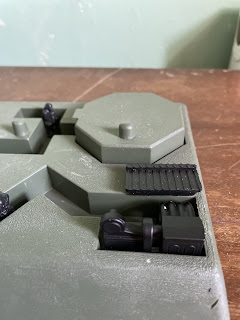 As I mentioned earlier, back in 1969, I was more involved with the 1/72 scale figures, such as the US Army and German Paratroops, so when my dad saw the Emplacement in the 7th Airfix catalogue, he decided it would be a fun project to scale it up in wood for me.
So, a few weeks later, I was presented with a larger version of the emplacement, some 2' long, suitable for the larger figures and vehicles. The whole thing is built from ply, with the 50cal machine gun in the turret being taken from a set I had in a lucky bag at the time. This was my only gripe, as it was a soft plastic toy and a bit bendy - plus it didn't fire! 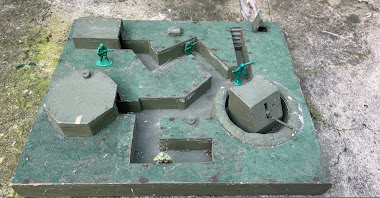 The upper surface was covered in green flock to imitate grass and the sandbags made from putty. It's weathered the years rather well, having spent a decade or two in various lofts and garages, being invaded by mice and spiders and exposed to damp.

My own son had a play with it during his childhood, but being of the modern generation was not altogether keen on it as it doesn't have the sound and lights of modern toys and is considerably heavier! 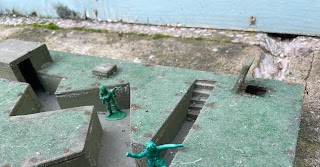 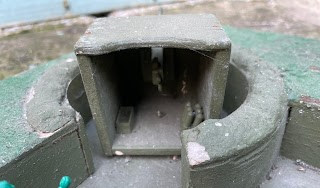 In the back of the turret can be seen the ammo box from the plastic machine gun nest and a rocket launcher from the back of one of the little green army trucks that arrived in most army sets in the sixties. The sandbags have been a little chipped, but will still stop a bullet today. 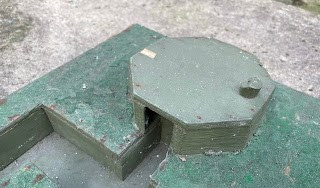 The layout of the pillboxes and trenches match the Airfix model perfectly, but the whole base is a little wider front to back to accomodate the larger figures. 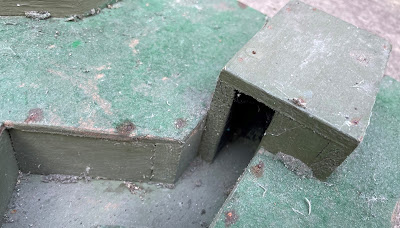