THE ORIGINAL OUTER LIMITS: THE GALAXY BEING

I've started something I wanted to do for ages. Years in fact.

I want to watch the American Outer Limits TV series, which aired from 1963 onwards. I was only 2 back then so won't have seen them first time round. I've seen the monsters on cards and comics for years since then so I do know what a few look like. They seem iconic to me now.

Fortunately the first episode, The Galaxy Being, was available on Daily Motion and I had the pleasure of the radioactive alien this afternoon. I did fall asleep for 10 minutes in the middle but that was my age rather than the show!

By way of marking off the episodes I see I am going to post the Topps card image of the monster shown [courtesy of Ebay images] and unlike the TV version these are in colour! For some reason Topps didn't put the correct name, the Galaxy Being, opting for the more alliterative Television Terror.

Have you watched the original Outer Limits? Were there any toys, games, books or models? 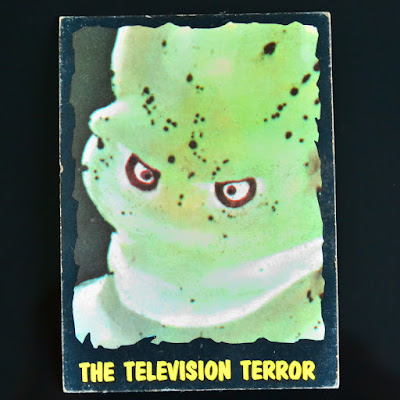 Email ThisBlogThis!Share to TwitterShare to FacebookShare to Pinterest
Labels: The Outer Limits