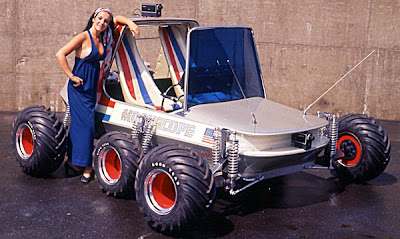 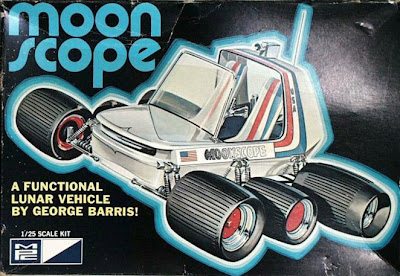 Not content with designing the famous TV Batmobile, hollywood car maker George Barris turned his attention to making a feature and style laden vehicle to travel the surface of the moon! Using an electric cart chassis and some exotic styling, he came up with the 'Moonscope'.

MPC made a small kit of the beast too, which also saw release as the Space 1999 'Space Alien' after some considerable modification and losing the two middle wheels. I picked up this kit o ebay a year or so ago and tried to make it up. Its full of chromed parts and tiny, fiddly bits and pieces. The overall build isnt great as the main body doesnt fit together well and there is an optional windscreen piece which doesn't figure in the instructions! I gave up after several superlued hours and assigned the better parts to the kit box for scratchbuilding. The one redeeming part of the kit is the wheels - each wheel is a three part assembly of neoprene-like rubber with a chrome insert, ideally shaped for a SWORD Moon Crawler!

Check this out: http://www.showrods.com/showrod_pages/moonscope.html
Posted by WOTAN at 10:27

MUSIC FROM MY YOUTH:SCHOOL'S OUT BY ALICE COOPER 1972