Asking for the Moon 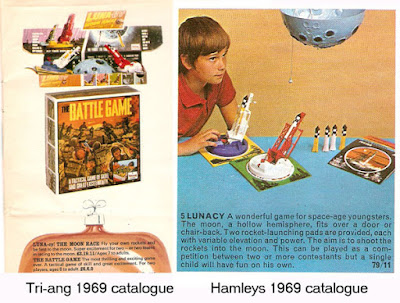 Back on the vintage space toy trail, here's a real cracker. My dad was forever bringing home toy catalogues on his travels and in 1969, appeared with a lavish Hamleys catlogue. Being in Liverpool, I've no idea where he got it, but I pored over it, picking out the toys I wanted that Xmas. But as Hamleys wasonly based in London, the chances of actually getting anything were literally as remote as asking for the moon, so I contented myself with the pictures and hoped that I would be able to see some of the unusual toys one day.

Some five or six years later, I was browsing a favourite model shop in Liverpool, now long gone, and in a side window, tucked away I saw one of these wonderful toys - Triang Rovex amazing Luna-Cy game! 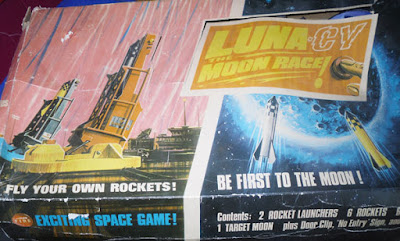 A big boxed game, it was clearly old stock and priced really cheaply. I sent my poor dad in later that week on his way home from work to grab it. It naturally got hammered to death and only bits of it remain, but some while back, I found a complete version on ebay, with a partial second set included. 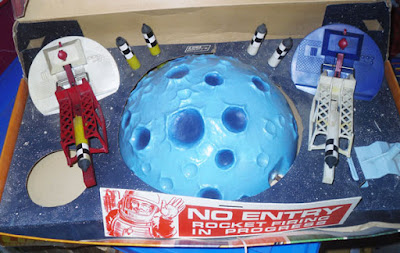 The box was batered, but showed the artwork well and with the two sets and bits of my original, I made a full set. The centrepiece is a big vacuum formed half moon, which you clip on the back of the door and fire rockets into. A brilliant idea! 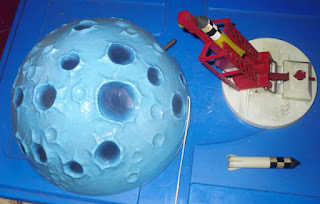 The flaw in this cunning plan though, besides the fragility of the moons plastic, was the launchers. Spring loaded, they had three power settings, adjustable by a switch at the end of the gantry. Even on a low setting, the launchers were powerful, but on full strength, they could hurl the plastic rockets a good thirty feet. As a result of the constant shooting, the little plastic lug which propelled the rockets upward, kept hitting the end of the gantry and eventually snapped off, making the gantry unuseable. 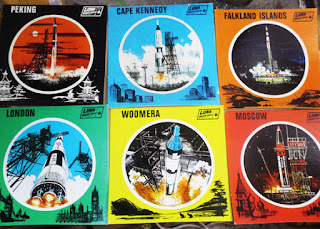 The set came with two launchers and six rockets as well as six card base pads, so you could choose which location you were launching from. After all the rockets had reached the moon, a cord on the side titled the half globe and tipped them out, ready for round two! 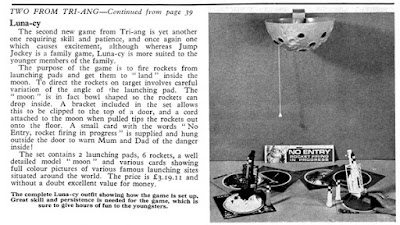 They certainly don't make them like that anymore! The launchers always remind me of the Soviet missile base in the pilot episode of Joe90, where he nicks the MiG242!
Posted by WOTAN at 20:00