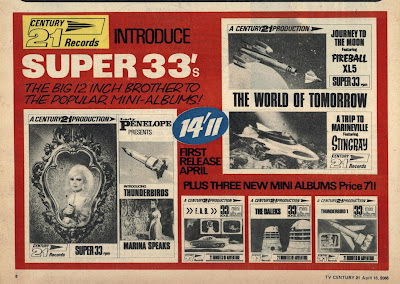 Earlier productions such as THE ADVENTURES OF TWIZZLE, FOUR FEATHER FALLS and SUPERCAR had seen exposure beyond the television screen through vinyl records but none were afforded the lavish production and promotion given to the joint venture between Century 21 and Pye Records. Pye enjoyed a fruitful association with AP Films/Century 21 throughout the 1960s releasing theme tune 45 R.P.M.s on their label including those for STINGRAY, THUNDERBIRDS and later JOE 90.
The company brought to the partnership an established network of distribution to records shops around the country as well as an understanding of how to promote their product in-store by way of point-of-sale displays and counter-top presentation boxes. Members of the team involved in the production of the actual programmes were drafted in to offer a level of continuity and realism to the project previously unheard of in television related merchandise.
Even Parker himself, voice artist David Graham, would co-write with Des Saunders the now legendary F.A.B. Mini-Album story featuring the Barry Gray classic 'The Abominable Snowman'. Alan Fennell too, one of the teams most prolific scribes and TV CENTURY 21 giant, found time to contribute to the ground-breaking venture.


Launching in September 1965 CENTURY 21 Records goal was to offer young listeners a plethora of suitably recorded vinyl records in the larger and longer LP format as well as the core of the brand the 33 R.P.M. Mini-Album. During the next two years a staggering thirty-seven Mini-Albums were released showcasing all of the most popular Anderson productions of the day including FIREBALL XL5, STINGRAY, THUNDERBIRDS and CAPTAIN SCARLET AND THE MYSTERONS. Other properties for whom Century 21 had negotiated a licensing agreement were also incorporated into the burgeoning merchandise onslaught.
Terry Nation's creation The Daleks appeared along with characters for the younger age category. Topo Gigio the popular puppet mouse created by Mario Perego, who would be voiced by Anderson stalwart Keith Alexander, enjoyed the prestige of a Mini-Album of his own along with Jean Morton's Koala favourites Tingha and Tucker who were the focus of two Mini-Albums and a long player.
Jim Lewis
read the next exciting part of Jim's week- long serial tomorrow at 21:00 UK TIME!....
Posted by WOODSY at 21:00