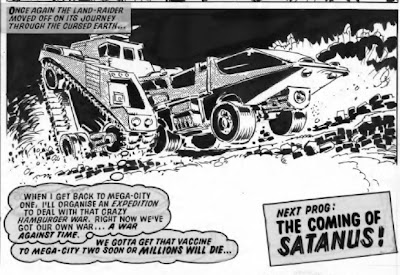 It was very interesting to see the 'Tigercaptain' vehicle recently, referred to as the Killdozer, Ive never seen the model before, but being a long time fan of 2000ad comic and Matchbox toys, I was familiar with the design. The classic Judge Dredd saga of the Cursed Earth, where an atomic wasteland existed between the two great mega-cities of America, and the hero had to battle his way across the continent to bring an antidote to a killer virus, was a real classic. The Cursed Earth was populated by mutants, monsters and all manner of crazy things and the air above the ground was home to a 'death belt' of orbiting debris left over from the nuclear holocaust meaning that the Strato-Bat aircraft had a near impossible chance of getting from a-b, so a ground journey was the only option. The story took an existing Matchbox Superking toy and dropped it into the storyline wholesale - im not sure if this was an early attempt at product placement or a blatant marketing ploy, but i worked for me and i went out and bought it! The Adventure 2000 line started off with the Raider Command, Flight Hunter and Crusader - only the main vehicle saw use in the comic. In 1982, the Striker Missile Launcher was added along with the smaller Rescue Hover Craft, Planet Scout and Cosmobile. The last release of the toys saw them finished in blue and the rare Shuttle Launcher added.

The interesting thing about the 2000ad story was that the concept of the Cursed Earth story was lifted directly from Roger Zelaznys story 'Damnation Alley' which was made into a film in 1977, the year before 2000ad was released. In itself a a rather limp portayal of a journey across a ravaged wasteland, it did feature a rather neat vehicle the Lnadmaster with the unusual triple wheel axis. This was based on an all terrain concept tested by the US Army. 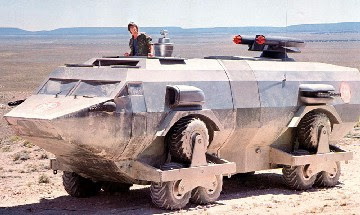