The Grand Prix Racing Car was part of the Action Man Sportsman range. 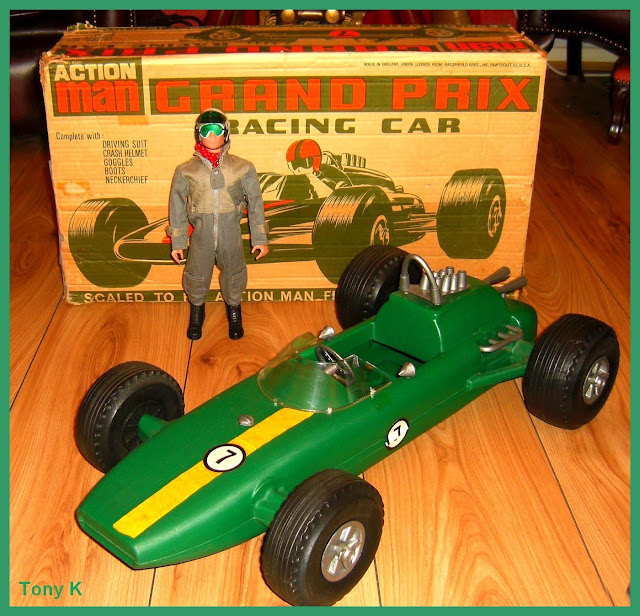 It was released at the start of the 1970's and had a short shelf life of approx two years. It was an exciting time for Action Man... the bullet holes had gone from the logo and Palitoy was incorporating sports and adventure themes into its catalogues. 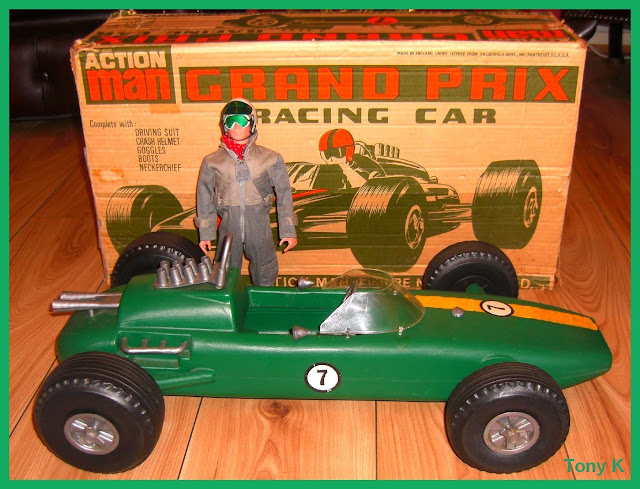 The series also included a World Cup Footballer, a Cricketer, an Olympic Champion, a Judo outfit with an assortment of grading belts, plus an erratic, battery operated, Go Kart. An example of the Action Man Go Kart can be seen below, featuring a GI Joe racing car driver with his own unique outfit. 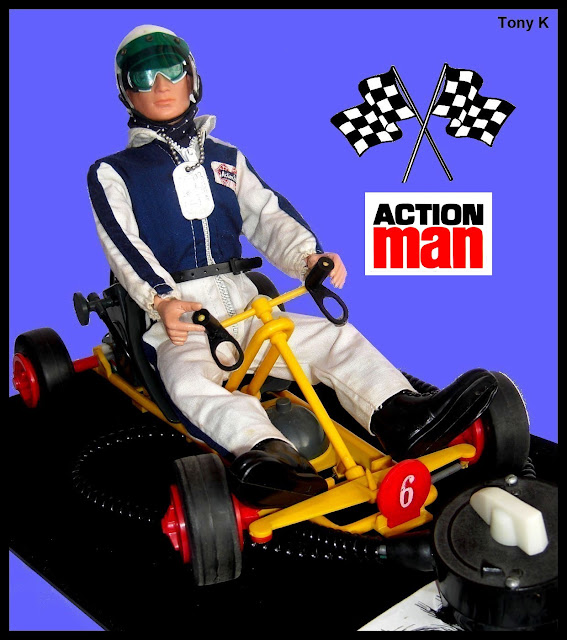 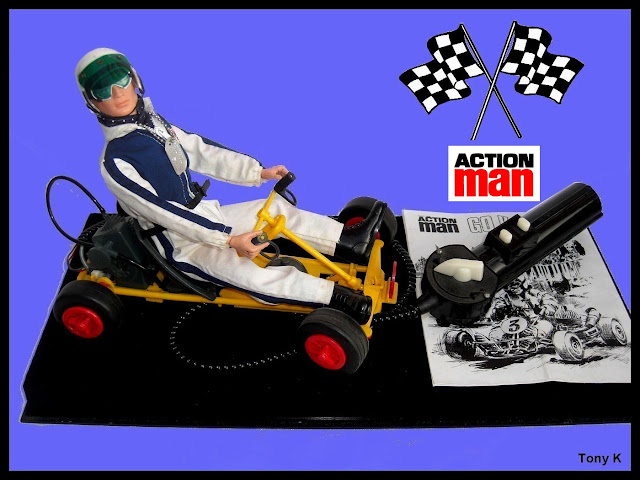 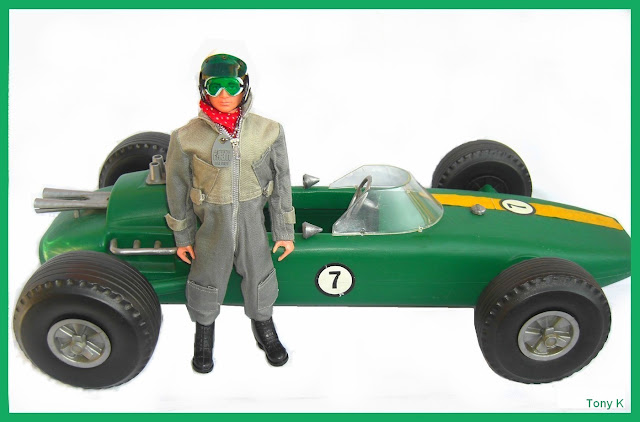 The large hollow-plastic shape of the car is playfully simple and emotive... skidding into the sort of serialised adventures kids would read in weekly comics and annuals, which now also reside in the past.

This 1/6 scale car was an uncomplicated push-along toy which was fuelled by a high octane cocktail of enthusiastic elbow grease and imagination. There was no friction motor and no battery operated sound effects. But then again, there was no real need for them.

Back then, kids were experts at mimicking all sort of action noises, from rapid machine gun fire and dive bombing explosions, to roaring F1 engines and wheel spinning screeches and crashes. Our generation were maestros of the improvised sound effect!

As well as the car, the boxed package also included an essential Action Man racing driver outfit. Two different style were produced. One was a two-tone variation of the Scramble Pilot's grey flight suit, with the Go Kart driver's authentic helmet and goggles - as shown in pics. 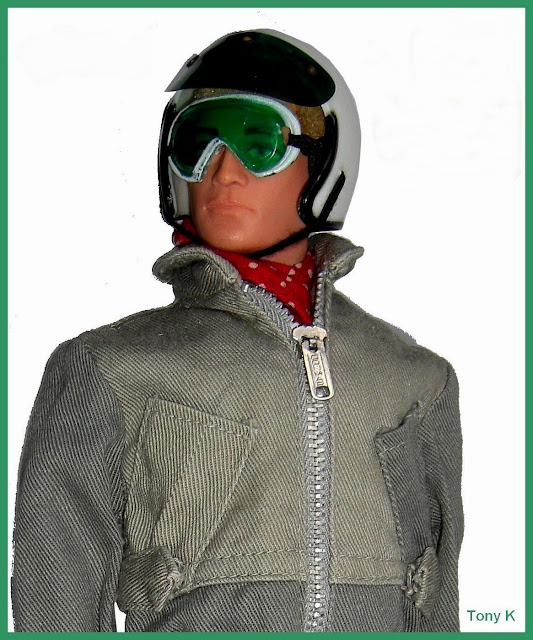 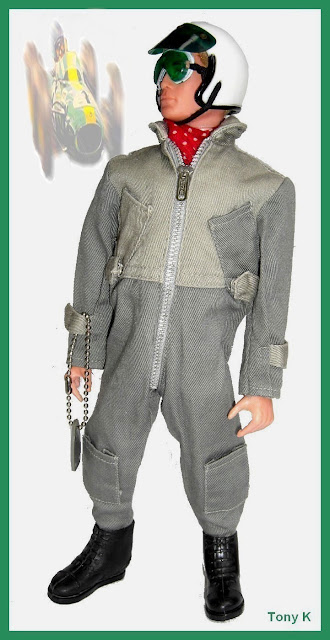 The other outfit consisting of the Landing Signals Officer's flight deck suit, accompanied by a bulky Scramble Pilot's helmet - as seen in the image taken from the period Action Man catalogue. A red polka-dot scarf was issued exclusively for the Action Man racing car driver and was included with both variations of the outfit. 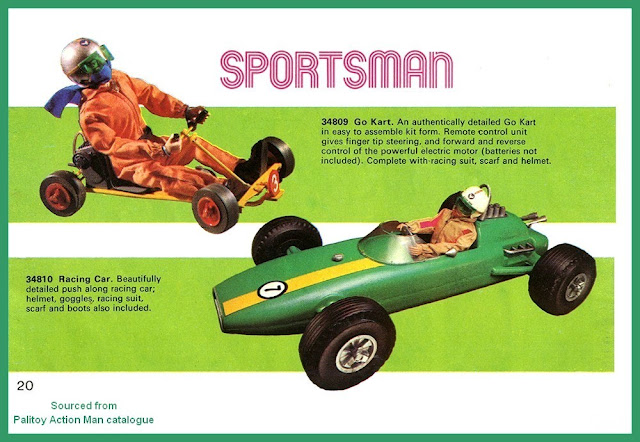 The 1970's living-room motor racing circuit, was a dynamically dangerous environment, often filled with hazards such as saboteur siblings and pursuing pets. Good examples of the Racing Car are now difficult to find. 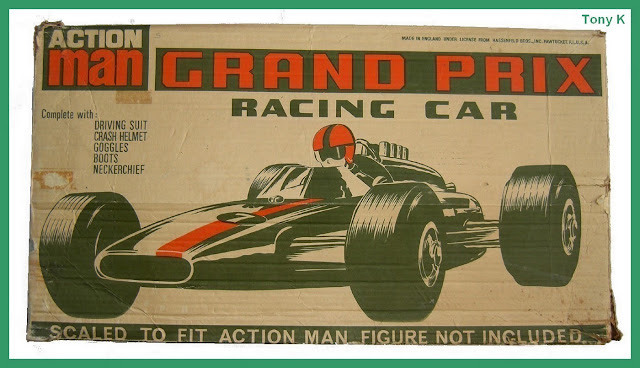 Those which do occasionally roll onto the starting grid of online auctions typically have missing, broken, or repro parts. The fragile plastic peg-in windshield was inescapably the first thing to break in a crash, and is today very difficult to find.

The car body was prone to abrasion, play wear, and sun fade, depending upon use and storage. Interestingly, custom models can be found in different colours, including red, black, and yellow.

These 'Commemorative Race Cars' were made for the 1995 Las Vegas GI Joe Convention and make eye-catching contemporary additions to the vintage collection.

For me at least, the vintage Action Man Grand Prix Racing Car symbolizes one of the best of yesterdays plastic toys. Simple and exciting, it demanded bags of hands-on energy and imagination... and gave hours of high speed fun in return.

It'll always hold a pole position as a favourite toy from the legendary Action Man line-up, which some of you will remember with affection,

if your memory serves you well.